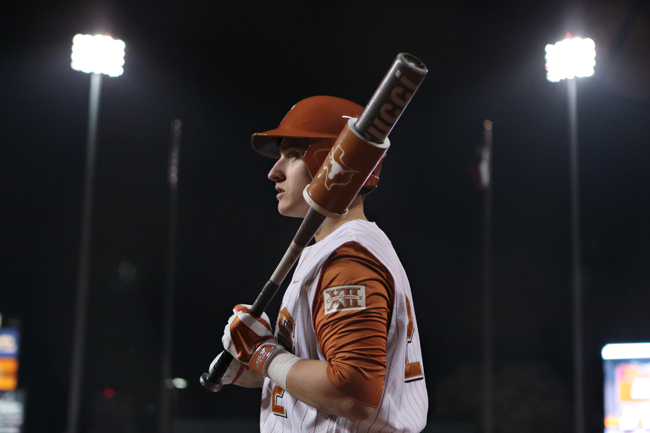 When the offense isn’t scoring, it’s hard to stay on track. But after three straight wins, Texas’ offense looks to be right where it needs to be.

Texas entered Tuesday night’s game on a two-game win streak after dropping its first two games of the season to California. A 10–run eruption against Texas A&M-Corpus Christi put the pop back in the Longhorns’ bats.

Head coach Augie Garrido’s “get on base” mentality has translated into 21 runs and three wins in the last three games for the Longhorns. Garrido is most impressed with the team’s defense to this point, though.

“I think we got better on the defensive side,” Garrido said after the 10-0 win against the Islanders. “Everything in the scheme really is about the pitcher. When we’re on defense, it’s all about getting to the pitcher and getting all the outs we can to protect him.”

After allowing nine runs in its first two games of the season, the Longhorns have given up just two runs during their winning streak, and the pitchers have combined for 17 and one-third consecutive scoreless innings, compiling a 0.86 ERA for the entire season.

“We’ve put ourselves into situations where we had to fight our way out,” Garrido said. “I thought it was good for our young pitchers to have the confidence to continue to throw to the mit.”

Almost half of the team’s lineup has been composed of freshman in the first five games of this season, but senior Mark Payton has continued to provide the star power, hitting .524 with four RBIs to this point. Despite early struggles for the newcomers, Payton feels the Longhorns have the leadership to help them get in the groove of things.

“Just try to keep them positive,” Payton said. “We’re working hard, and this is a young team. If something doesn’t go right, they’re just going to learn from it and get better the next time.”

Texas will enter this weekend’s series against a Stanford team that has scored 21 runs in its last two games to improve to 2-2 on the season. Stanford has won the last six games against Texas and holds a 31-27-1 record in the all-time series with the Longhorns.

“We’ve always had very competitive games, and they’re a very detailed organization,” Garrido said. “They’ll take advantage of any little thing you’ll give them. And that’s always good to reveal your weaknesses so that you know what to practice next.”

After surrendering six runs — all unearned — in a loss in his first appearance of the year, ace Parker French will toe the line for Texas in the opening game Friday night.

The two historic programs are set up for an intriguing series, with both offenses rolling into this weekend ready to play.