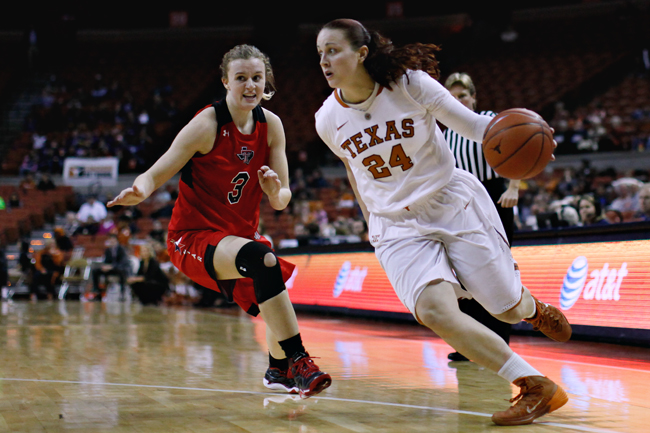 Senior Chassidy Fussell is second on the team with 10 points per game this season.

The Longhorns hope to redeem themselves against Iowa State in Ames, Iowa, on Saturday after a disappointing 1-point loss to Oklahoma Wednesday night.

According to head coach Karen Aston, the problem wasn’t necessarily the points, but the defense — an area in which the Longhorns typically excel.

In their upcoming game against the Cyclones, the Longhorns need to whip their defense back into shape and return to the high defensive standards they set earlier in the season.

After a tough loss, Texas needs a decisive win to restore its confidence and get the momentum rolling in the right direction. Ideally, the Longhorns would take on an unimposing team such as Texas Tech, which would give them leeway to play around with changes and make corrections. But the Longhorns will have no such luck with the Cyclones.

Iowa State is a team the Longhorns have a good chance of beating, but after such a devastating loss, their chances have been pressed thin.

The Longhorns narrowly pulled out the win against Iowa State in their last meeting. Texas secured its first lead at the 2:55 mark and managed to hold on to it long enough to walk out with a 71-64 win. On Saturday, Texas won’t be able to take any chances with a slow start. The Longhorns haven’t had the best luck in dealing with dire situations in the final minutes.

Further compromising Texas’ shot at victory is the fact that Saturday’s game is on the road, where the Longhorns are 3-6 on the year. The last time the Longhorns faced off against the Cyclones, Iowa was ranked No. 23 and Texas pulled off the upset. But that was at home in the Frank Erwin Center.

Iowa State is coming out of an upsetting loss as well. On Wednesday, while the Longhorns were heading home with their heads down, so were the Cyclones. Baylor ran over Iowa State, scoring 89 points to the Cyclones’ 51.

With two teams seeking redemption, Saturday’s game is likely to be a close one.