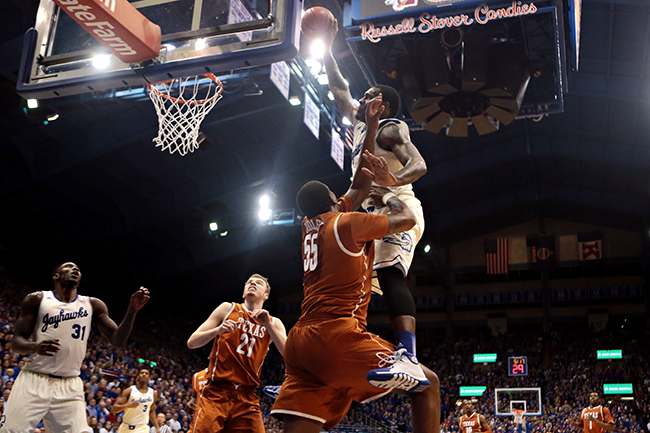 LAWRENCE, KAN. — The constant pressure of a raucous Kansas crowd at Allen Fieldhouse proved to be too much for Texas’ inexperienced lineup on Saturday.

Nine Longhorn underclassmen combined for just 37 points on just 28 percent shooting, as Kansas soared past the Longhorns, 85-54, in Lawrence, Kan.

“We haven’t responded on the road the way we need to,” said Texas head coach Rick Barnes, whose team has now lost three straight away from the Frank Erwin Center. “It goes back to execution, mental toughness and consistency and we haven’t done those things.”

Nobody looked more rattled by the Jayhawk faithful than freshman standout Isaiah Taylor, who was playing in his first game at The Phog. Taylor missed his first 11 field goal attempts and finished with more turnovers (2) than field goals (1).

“Isaiah [Taylor] missed some shots early,” Barnes said. “But what really surprised me is that he didn’t do what we needed him to do offensively. They would deny him at the top and he would just give the ball up and stand there. He needs to learn how to play without the ball.”

Sophomore center Cameron Ridley also struggled mightily in the contest, obviously hampered by Jayhawk freshman Joel Embiid’s interior defense. Embiid had six blocks and Ridley, who failed to record his first points of the game until the 13:29 mark of the second, scored the majority of his 11 points after the projected first overall pick had left the game.

“Coming into this game I had a different mindset,” Embiid said. “I just wanted to come in and show what I could do and I feel like I did that.”

Embiid’s six swats gave him 63 on the season, setting a new freshman record at Kansas.

“Breaking the record is a great accomplishment for me,” Embiid said.

The Longhorns held their own in the game’s early stages, getting out to an 8-3 lead in the first four minutes. But it was all Kansas from there, as the Jayhawks went on a 25-2 run and lead 46 – 18 after 20 minutes.

Kansas’ first half run was led by superstar freshman Andrew Wiggins, who had 15 in the opening frame, including eight points on three consecutive possessions. After throwing down an alley-oop slam, Wiggins hit back-to-back threes and sent the sellout crowd into a frenzy. The Canadian native finished with 21 points and six rebounds.

“I was fired up for this game,” Wiggins said. “When I score early it brings more confidence to my game. My teammates got me the ball where I like to shoot the ball, where I needed it, and that got me going.”

Junior forward Jonathan Holmes was the lone bright spot for Texas. Holmes made seven of his 11 field goal attempts en route to a 17-point, six-rebound performance.