Andrew Wiggins’ size, athleticism too much for Texas to handle 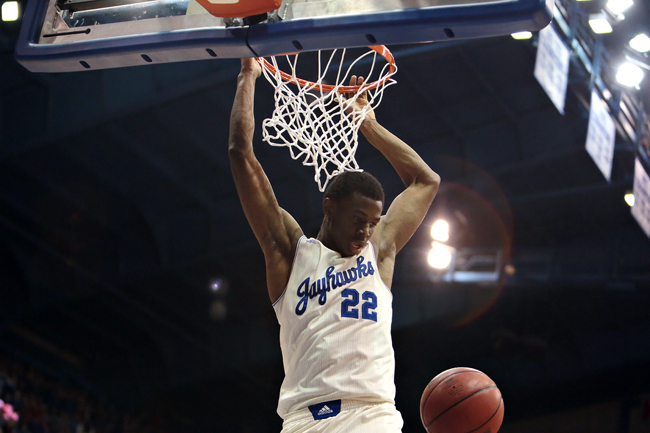 LAWRENCE, Kan. — It didn’t take long for the blue and white wave to hit Texas. And, when it did, the swell proved too much to handle.

Led by freshman phenom Andrew Wiggins, the Jayhawks blitzed the Longhorns in the first half. A 25-2 run quickly erased an early 8-3 Longhorns lead, much like Wiggins’ play Saturday evening removed any doubts stemming from his 7-point performance earlier in the year against Texas.

Wiggins, who finished with a team-high 21 points, played a huge role in Kansas’ run. He scored 15 points on 5-for-6 shooting during the stretch and did so in convincing fashion. Wiggins connected on all three of his attempts from behind the arc and added a pair of authoritative dunks over the six-minute scoring binge.

“When I score early, it brings more confidence to my game,” Wiggins, who is projected to be a top-three pick in the upcoming NBA drafft, said. “My teammates got me the ball where I like to shoot the ball, where I needed it. I was fired up for this game.”

Wiggins’ first slam was of the two-handed variety: a dunk so ferocious it produced a deafening roar from the crowd that appeared to coax the Longhorns’ ensuing timeout. From that point forward, Texas didn’t find much success on either end of the floor.

“[With] one or two possessions, you can be down by six, eight, and [then] the game’s over just like that,” junior forward Jonathan Holmes said. “The effort was nonexistent. We tried a little at the beginning and we got some adversity and didn’t come back and fight.”

The one-sided final did not result only from Wiggins’ performance, but it played a significant role in the final outcome. The 6-foot-8 forward proved to be a huge mismatch for the Longhorns, a team without a true small forward capable of matching his blend of size and athletic ability. Texas head coach Rick Barnes searched for a solution in a mix of zone and man defense that put 6-foot-2 Demarcus Holland guarding Wiggins.

Neither matchup was successful for Texas on Saturday, as Wiggins picked apart both looks. Against the zone, Wiggins showed a deft touch from the outside, converting on 3-of-5 3-point attempts. And, when he faced man coverage, he moved to the basket for dunks and layups with ease.

Texas wanted this game, but, according to Barnes, it didn’t show the mental fortitude to win in a hostile road environment. Kansas had no such problem. Following its early loss to Texas, the Jayhawks had an extra motivation at stake.

“Our pride,” Wiggins said. “We got embarrassed [against Texas the first time] so we wanted to do the same thing to them. Take it to them and win every minute, every second on the court.”