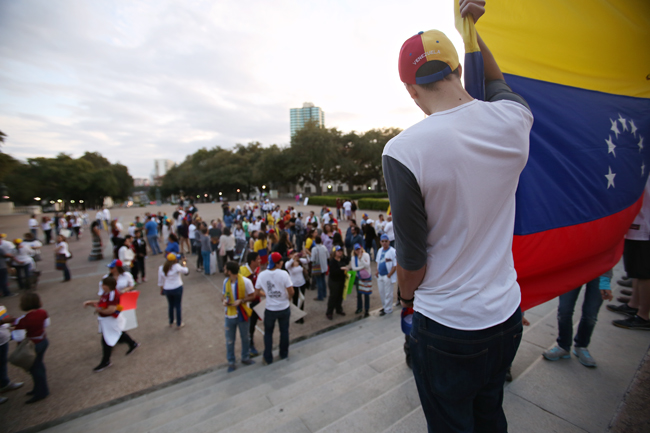 Texas State graduate Alejandro Fernandez holds up a Venezuelan flag during a rally in the Main Mall on Saturday afternoon.

Students and members of the Austin community rallied on the South Mall on Saturday in support of recent protests staged by Venezuelan students demanding free speech, among other civil rights.

The rally, coordinated in part by the Brazilian and Venezuelan Student Association, or BRAVEN, included flags and signs stating “Say NO to Communism” and “#PrayForVenezuela”. The attendees then formed the letters “SOS” in front of the UT tower with their bodies — a symbol replicated in more than 50 cities all over the world on Saturday. The unified effort was live-streamed between demonstrations in other cities to encourage awareness of Venezuela’s current state.

Earlier this year, students in Venezuela took to the streets, protesting the lack of free speech and civil rights they believe are required of a democratic country. The protests have recently turned violent, resulting in the deaths of at least three individuals, according to a CNN report.

Architectural engineering graduate student Jose Latorre, who has family in Venezuela, said he is frustrated by what he feels is a lack of action on the part of foreign governments.

“It’s a strong feeling to explain, being away from the people you care about while they have to suffer,” Latorre said. “The international community is doing little to nothing.”

Three U.S. diplomats in Venezuela were given 48 hours to leave the country last week, and Colombian-based cable news network NTN24, as well as CNN, has been blocked from televisions in an effort to control the media.

Elvita Atencio, an Austin kindergarten teacher who spoke at the event, said her decision to leave Venezuela was one she wishes everyone was able to make.

“We’ve had to emigrate — we don’t have jobs,” Atencio said. “Things are so unsafe now.”

According to Atencio, incidents involving kidnapping, rape, robbery and general chaos have increased in Venezuela in recent months.

Venezuelan President Nicolas Maduro, successor to the deceased Hugo Chavez, blames his political opposition as the cause for the problems it protests against, according to a WorldPost report.

According to a February report by CTV, Venezuela’s economy has one of the highest inflation rates in the world — now at 56 percent — which has led to basic goods either skyrocketing in price or missing from shelves entirely.

Matheus Chagas, government junior and one of the co-founders of BRAVEN, said he hopes the rally will spark action in other countries.

“One post can change the world,” Chagas said. “We want to be the voice that the government is trying to repress.”