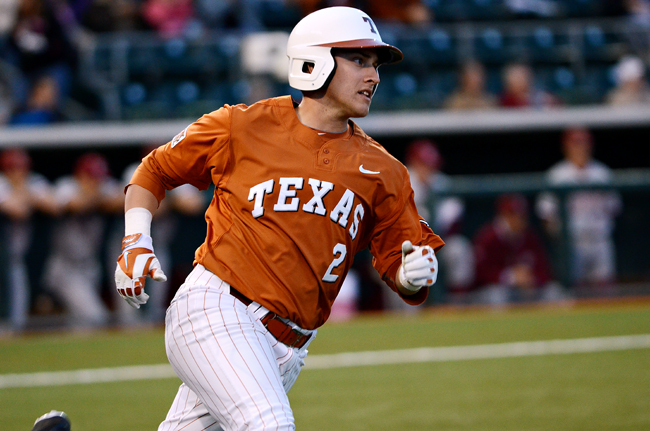 Senior outfielder Mark Payton rounds first base after a hit during Texas' weekend series against Stanford. Payton is leading his team with a slugging percentage of .935 as the Longhorns take on UTPA on Tuesday night.

When junior infielder Brooks Marlow singled to right field with two outs and the game tied, the crowd rose to its feet.

Senior outfielder Mark Payton began his slow walk to the plate. He was 6-for-7 against Stanford in the series at this point.

“He’s confident,” head coach Augie Garrido said. “He thinks he’s got them right where he wants them. That’s confidence.”

And, to no one’s surprise, Payton delivered, scorching a single up the middle to load the bases. A Stanford wild pitch just a few pitches later would bring in the winning run for Texas.

“Yup. [Payton’s] got my national player of the year vote,” a Stanford man half-seriously joked in the press box.

Payton is hitting .613 while slugging .935. Both numbers lead the Big 12, far ahead of his contenders.

“He is really playing the game at a high and mature level right now,” Garrido said. “He is just hitting the ball where it is pitched.”

It’s a small sample size. He is just eight games and 31 at bat into his senior year, but, at the same time, his hits are rockets — line drives capable of decapitating the pitcher.

“So, that’s baseball too,” Garrido said about hard outs. “It’s really hard to control the direction of the ball, except for Payton.”

And, when the pitches aren’t there, he doesn’t swing. After going 3-for-3 Saturday against Stanford, the Cardinal didn’t want any part of him, so Payton walked down the first baseline three times.

“I’m just keeping it simple,” Payton said. “Our job as hitters is to get the bat to the next batter.”

Payton sits at just 5 feet 8 inches, the smallest player on Texas’ roster. He’s not physically superior — but technically sound. His hard work is paying off — he’s in the midst of the hottest streak of his career.

“I don’t pay attention to it,” Payton said. “I’ve never really thought about it.”

Instead, he deflects the attention to the team, using “we” in almost every response. He has bought in to Garrido’s philosophy that teamwork, not individuals, wins games.

“I think the other thing unknowingly he is doing is passing it on to his teammates,” Garrido said. “We worked on teamwork, and it’s showing. They are not playing for batting average; they’re playing to keep the rally going and to take a quality at bat. They are fighting to get their teammate to the plate.”

Payton will look to continue his streak when UTPA comes to UFCU Disch-Falk Field on Tuesday at 4:30 p.m.