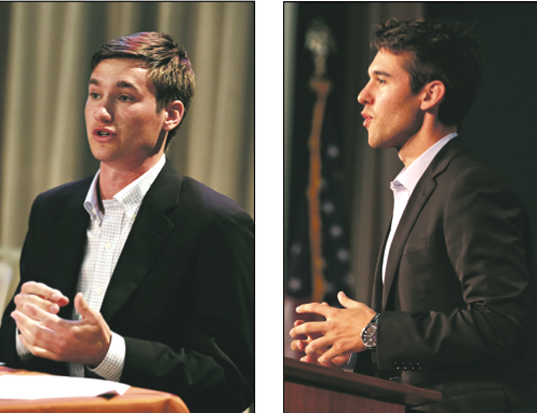 Kenton Wilson, left, and Kornel “Kori” Rady spoke at the Student Government candidate debates at the Student Activity Center on Monday evening. Wilson and Rady are both running for the SG president position.  " />

Kenton Wilson, left, and Kornel “Kori” Rady spoke at the Student Government candidate debates at the Student Activity Center on Monday evening. Wilson and Rady are both running for the SG president position.

At the Student Government debate Monday night, executive alliance candidates highlighted their differences on the issues of a new program, Safe Ride, a student activity center in the Riverside area and their respective involvements in the Greek community.

“I don’t like to see student fees going towards something like that as opposed to something that serves all students,” Wilson said.

Rady and Strickland both said the program would give students a safer option to get home instead of waiting half an hour for a bus.

“It’s one thing to take us to our respective neighborhoods, but the next step would be right to our doorstep,” Strickland said. “Sometimes, that walk from the bus stop is also an issue.”

The Rady-Strickland campaign also disagreed with Wilson-Carter’s support for the creation of a student activity center in the Riverside area.

“The [center] in Riverside is interesting, but I wouldn’t want to pay for a facility I would never use,” Rady said.

Wilson said he did not know how much the initiative would cost and estimated the building would take several years to complete. He said a study location at Riverside would be safer for students who live off campus.

Without endorsements from the Interfraternity Council, known as IFC, both alliances said their work with the IFC and the University Panhellenic Council, known as UPC, were important parts of their platform. As a member of Kappa Kappa Gamma, Carter is the only candidate directly involved the Greek community.

“I would not be a part of Student Government if it had not been for my involvement in Kappa Kappa Gamma as a freshman,” Carter said.

Rady said, although he and his running mate are not in the Greek community, they have worked directly with the IFC and UPC to develop their platform.

“Our platform points of Safe Ride and the extended Thanksgiving break has garnered massive support from the Greeks,” Rady said.

“Stipends are put forward by Student Government to create a level playing field,” Wilson said. “Fortunately, I haven’t had to have a job while I’m in school. That’s not the initial purpose of the stipend; therefore, I will not be taking one.”

Strickland said she had not given the stipend much thought since election season was still going on.

“At the same time, it is very important to understand that it is an option for [the executive alliance] because we are unable to take jobs because it is a very big time consumption,” Strickland said.