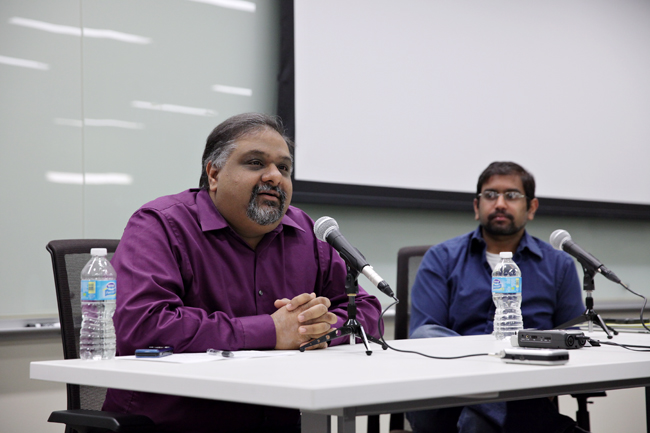 Assistant professor Snehal Shingavi and author Rahul Mahajan discuss the rise of religious nationalism in the context of the upcoming 2014 election in India at the Belo Center for New Media on Tuesday night. " />

Assistant professor Snehal Shingavi and author Rahul Mahajan discuss the rise of religious nationalism in the context of the upcoming 2014 election in India at the Belo Center for New Media on Tuesday night.

The talk, “Is Intolerance on the Rise in India?,” was put on by the Azad Forum for Social Justice, an organization centered on raising awareness about politics in South Asia. Journalism professor Robert Jensen, who moderated the talk, said it was an opportunity to learn about another part of the world and get an understanding of how U.S. trends affect other areas.

“In the United States, there’s been a growth and appreciation of diversity and multiculturalism along with the need to be tolerant,” Jensen said. “But often tolerance is used as a defense against critical thinking and engagement. I think this notion of tolerance without critique is very dangerous, and that’s what we’re here to do tonight.”

Narendra Modi is the prime ministerial candidate for the Bharatiya Janata Party, but he is surrounded by controversy because of his alleged involvement in massacres of Muslims in India, according to Mahajan. Mahajan said Modi has not been held accountable for his involvement in the massacres in the 12 years since they occurred.

“It’s quite a remarkable thing — a politician who is deeply involved in a series of massacres that probably claimed 2000 lives, and then, later in 2002, essentially campaigns on the basis of the massacres,” Mahajan said. “The problem with figuring out all of the details of this is that the investigations were done in a context where [those questioned] were subject to large amounts of coercion.”

The latest polls show Modi is headed toward a victory in the upcoming election, Mahajan said.

In order to add context to Modi’s candidacy, Shingavi said Hindutva, an invented phenomenon meant to revitalize the Hindu religion and culture, is associated with the massacres.

Parvathy Prem, an aerospace engineering graduate student, said she came to fully understand the progression that led to the current state in India and get opinions on the matter, as she has thought a lot about the matter in the last few months.

“As an Indian, I think the upcoming elections are hugely important,” Prem said. “I also thought it was interesting that both speakers thought the way to go about fighting communalism is going about economic change.”

Clarification: This story has been updated from its original version. Hindutva, an invented phenomenon meant to revitalize the Hindu religion and culture, is associated with the massacres.