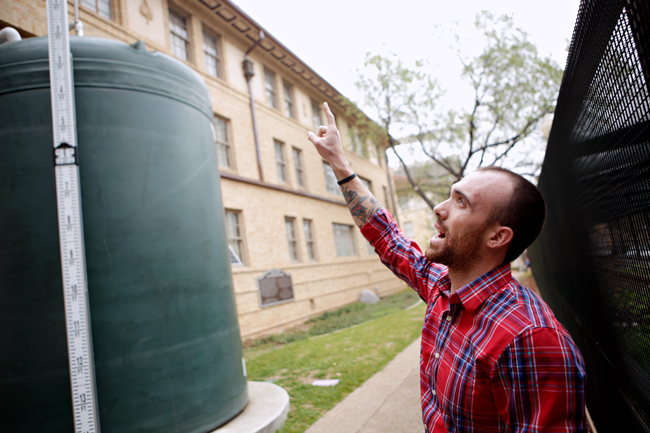 Hunter Mangrum, the environmentalist specialist for the Division of Housing and Food Services, describes their rain-water reuse system that was constructed outside of Jester West last September. The water is specifically used for a garden that provides food for student consumption, as well as educating students on methods of reusing natural resources. " />

Hunter Mangrum, the environmentalist specialist for the Division of Housing and Food Services, describes their rain-water reuse system that was constructed outside of Jester West last September. The water is specifically used for a garden that provides food for student consumption, as well as educating students on methods of reusing natural resources.

As drought conditions continue to worsen, the University is in the process of expanding its water conservation efforts by targeting dorm residents’ water usage.

Markus Hogue, UT’s irrigation and water conservation coordinator, said while state legislators are considering water conservation policies, the University already has several water-saving technologies in place, including an irrigation system that reduced water usage by 66 percent in 2013. The drought will develop, persist or intensify in the majority of Texas at least through May, according to the National Weather Service.

“Luckily for UT, they saw it,” Hogue said. “They saw the writing on the wall, and they started preparing for it. The timing couldn’t have been better. We put [the system] in right when we needed it the most.”

The University’s irrigation system detects breaks and automatically turns the system off. Hogue said that feature alone saved 10 percent, or 10 million gallons, of the system’s overall usage in 2012. A system program uses live weather data, including factors such as sunlight and humidity, to determine how much water is needed.

Hunter Mangrum, an environmental specialist at the University, said UT has installed retrofits — new features that are compatible with existing systems — in dormitories with the hope of using less water. In some bath areas, Mangrum said, shower and light timers and low-flow toilets, urinals, shower heads and faucets were installed.

Mangrum said the water-saving techniques the University can implement in older buildings may be limited.

“We still have major hurdles, and a lot of times that has to do with how buildings are built and everything that we try to pack into a building,” Mangrum said. “That’s not just a UT problem. That’s a global problem.”

Hogue said the University has saved water by changing the outdoor landscape surrounding the buildings. According to Hogue, the University’s landscaping master plan will allow the University to include more drought-resistant plants.

Mangrum said he thinks student input is important to making water conservation a priority on campus.

“What I would like to see in three years [or] five years are students consciously thinking about when they turn on a sink faucet and how long it’s on for,” Mangrum said. “Even a bigger dream than that is that students have so much buy-in that they are creating the new technologies.”

Hogue said he’s working on a project that will have real-time data of the water usage of every building and area on campus, and he is working with other universities and associations who are interested in making similar changes.

“Not only are we saving [water] on campus, but think of the impact we’re having on our community [by] spreading the word,” Hogue said.