Texas basketball holds on at home, knocks off Baylor 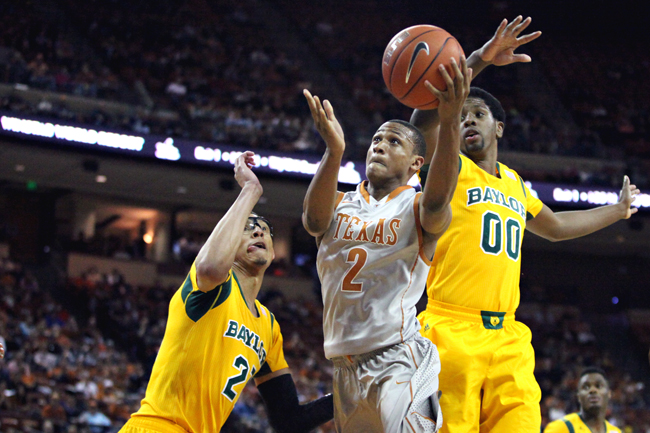 Sophomore guard Demarcus Holland penetrated the Baylor zone in a 74-69 win Wednesday night at the Frank Erwin Center. Despite being up by 18 in the first half, the Longhorns had to hold off a second-half Baylor rally to secure the win. " />

Sophomore guard Demarcus Holland penetrated the Baylor zone in a 74-69 win Wednesday night at the Frank Erwin Center. Despite being up by 18 in the first half, the Longhorns had to hold off a second-half Baylor rally to secure the win.

A left-handed layup high off the glass by freshman point guard Isaiah Taylor put Texas ahead by 3 points with 43 seconds left in Wednesday’s game. But it was a one-handed block by sophomore center Cameron Ridley on the other side of the court that sealed the victory for Texas.

After back-to-back losses, the Longhorns (21-7, 10-5 Big 12) moved back into the win column Wednesday night against Baylor. Among a rowdy crowd at the Frank Erwin Center, the Longhorns beat out the Bears 74-69 to gain their first Big 12 win in more than 10 days.

“This was a big game because of the way we played,” head coach Rick Barnes said. “We hadn’t given ourselves a chance in the last two games. But there are teams that at this time of the year think championships and teams that are just in survivor mode. So we told them they are going to want to play a lot of basketball.”

Texas looked dominant in the first frame, and at one point led by 18 points. The Longhorns overpowered a lethargic Bears team with an energized offense. Fueled by sophomore guard Javan Felix’s five 3-pointers, Texas shot 51.6 percent from the floor in the first frame to give it a 15 point lead heading into the break. It was no different on the other side of the court, where a hard-nosed defense held Baylor to just 25 percent shooting.

It was a different story in the second half, as Baylor came out of the locker room with a combination zone and man defense that caused trouble for the Longhorns.

As the Longhorns adjusted back to the energized play it had in the first half, they were able to hold off the Bears. It wasn’t until Taylor’s layup that Texas took the momentum and the victory.

“There’s going to be a time in every game when you need someone to go get one and someone to go stop one,” Barnes said. “[Taylor] is really good in his floater game and we know that. So sometimes it better to just let him open up and go. He’s going to get it there.”

Felix led his squad with 21 points, including seven 3-pointers. Ridley finished with 20 points and 10 rebounds.

“I felt really good,” Felix said. “We had a lot of time to get extra reps on our own. It just felt good coming out of my hand today.”

The Longhorns hardly outrebounded their opponent, 41-40, but had the 34-18 advantage in the paint.

Texas has three games left in the regular season, sitting in third place, as it travels to face Oklahoma on Saturday.

“We need to carry this momentum,” Holmes said. “Last week we didn’t execute on the road, but it’s easy to play at home. Taking it on the road is a whole another challenge. We need to play our best game like we played here.”