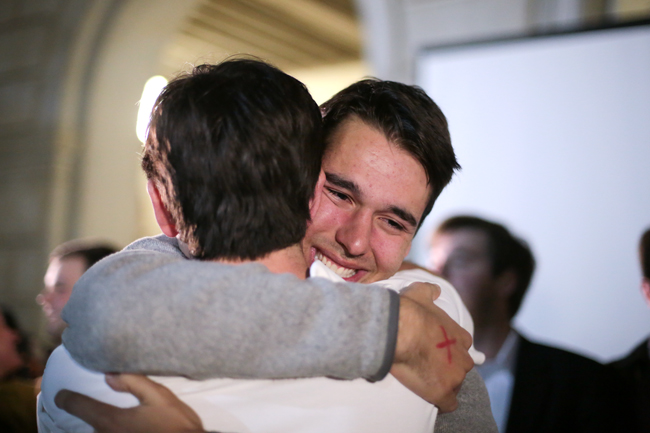 For a complete list of election results, scroll to the bottom.

“We ran such a positive campaign,” Rady said. “I feel like we deserve all that has happened here tonight, and we can move forward and do great things for the University.”

According to Lutz, the two-hour technical delay, which began when the voting website crashed 15 minutes before the polls closed, was caused by a third-party technical difficulty. Lutz said the board will resolve the issues before the runoff election for the eighth University-wide representative position, which will be held Wednesday and Thursday. The two candidates in the run-off, Wes Draper and John Brown, each received exactly 2,080 votes for the position.

Rady continued campaigning on social media when it was announced that polls would close almost two hours later than expected.

Rady said he plans to deliver on platform points including an extended Thanksgiving break, creating a SafeRide program to taxi students home from downtown and creating an upperclassmen shadowing day to pair freshmen with seniors.

Wilson said he was happy his campaign was able to increase involvement among students who did not have Student Government experience.

“It was close, and obviously we would have liked to come out on top, but overall [Rady and Strickland] are highly qualified and they’ll do a great job next year,” Wilson said.

The Election Supervisory Board heard four complaints Wednesday night, with one resulting in Graduate Student Assembly candidates David Villarreal and Brian Wilkey being forced to cease campaigning until 5 p.m. Thursday because of a campaign worker sending unsolicited emails.

Despite the board’s decision, Villarreal and Wilkey won the executive alliance race for GSA. There were 507 graduate students who voted in the GSA presidential election.

The eighth university-wide representative will be determined in a run-off election March 5 and 6. Candidates John Brown and Wes Draper each received 2080 votes.

University Co-op Board of Directors: Alex Bryan and Jake Schwartz

University Unions Board of Directors: Matthew Ealy and Vicky Nguyen