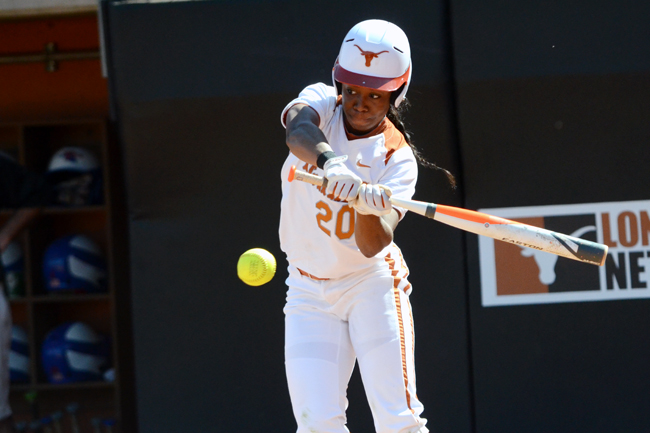 Senior outfielder Brejae Washington ranks second on the team with a .375 batting average and first in hits with 21. " />

Senior outfielder Brejae Washington ranks second on the team with a .375 batting average and first in hits with 21.

At the beginning of the season, the offense was supposed to carry the Longhorns while a young pitching squad figured out how to replace the holes left by Blair Luna and Holly Kern.

But through 17 games this season, the offense has been inconsistent. After averaging 7.5 runs per game in their first four games — all wins — Texas has only scored seven or more runs in three of the last 13 games. The Longhorns have left 135 runners on base and have had at least the tying run at the plate in the last inning in seven of their nine losses.

The team will have a chance to improve its consistency this weekend at the Texas Invitational — its only tournament without a ranked opponent. Texas will host Texas Southern, Louisiana-Monroe and Southern Mississippi.

Louisiana-Monroe comes in with the best record of the four teams at 12-4, but has yet to beat a ranked opponent. Offensively, the Warhawks are led by freshman infielder Vanessa Garcia, who’s batting .439 with three home runs and 16 RBIs, while redshirt senior Samantha Hamby has dominated in the circle with a 7-1 record and a 1.75 ERA in 48 innings pitched.