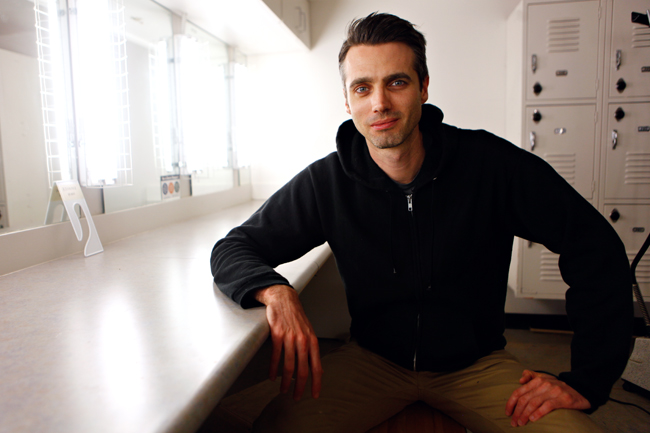 Abe Koogler, Master of Fine Arts in playwriting at the UT Michener Center is presenting his latest play, “Advance Man,” as part of the seventh UT New Theatre annual showcase on Friday. " />

Abe Koogler, Master of Fine Arts in playwriting at the UT Michener Center is presenting his latest play, “Advance Man,” as part of the seventh UT New Theatre annual showcase on Friday.

Abe Koogler’s quiet persona masks the swirling ideas that are the driving force behind the theater experiences he tries to create, combining music, language and dance. He pauses during the conversation to gather his thoughts during the interview. He begins, realizes those were not the words he would have liked to use and instead, slowly begins to channel his thoughts. His emphasis on his choice of words to describe who he is as a playwright matches his approach to scripting his plays that emphasize the importance of language.

Koogler — a writing graduate student — presents his latest play, “Advance Man,” as part of the seventh UT New Theatre annual showcase on Friday. The showcase allows emerging playwrights from UT to present their latest works. Koogler moved to Austin in 2011 when he joined the Michener Center for Writers to pursue his Master of Fine Arts in playwriting.

“‘Advance Man’ has been a big step forward in my writing,” Koogler said. “It combines language that is really musical with what I hope is a compelling narrative and story.”

Koogler’s play is centered around a small town called Bear Creek, a tight-knit community of people who look out for each other and who have a largely shared set of political beliefs. In the play, “advance man” works for the president. He arrives in Bear Creek prior to the president’s impending visit to look into things and to ensure there are no visible threats. During his time there, he befriends one of the locals and seeks her help to prepare for the president’s visit.

Koogler pursued acting and writing in his younger years, but left it to pursue a degree in political science from Yale University. A summer internship with the Financial Times in London quickly made him realize he didn’t want to be a reporter. After graduating in 2006 from Yale, Koogler spent a few months working on political campaigns and continued to work as a freelance political consultant for a few years by writing speeches for politicians. He then decided it was time to go back to what he missed being a part of — theater.

Koogler said he is especially fond of playing and creating darker, weirder characters in his productions.

“I can’t really help it,” Koogler said. “For better or for worse, whatever emerges when I sit down in front of my computer is the type of the play that I’m writing and it tends to be funny, a little bit dark and definitely strange.”

It was last year that Koogler met UT MFA graduate Will Davis, director of “Advance Man.”

“Abe is incredibly creative and has got a fantastic vision,” Davis said. “He’s a playwright who thinks a lot about rhythm and the way words and language can convey emotions.”

Koogler began writing “Advance Man” in one of his writing classes at UT and it took him almost a year and a half to develop and refine it. It was in one of his classes that Koogler met Steven Wilson, an actor and protagonist in “Advance Man.”

“Abe’s primary tool in his plays is language,” Wilson said. “For most performers, an internal connection to the character is the primary jumping-off point in crafting a character. For Abe’s plays, one must give over to the language and embrace it. Only then will the character begin to develop.”