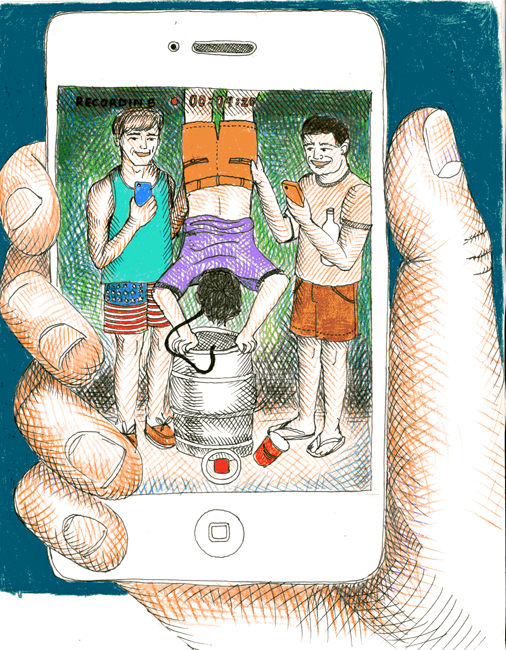 While chugging a six pack in five minutes is not the average college party trick, the drinking game “neknominations” encourages students to do just that — on camera — to earn bragging rights.

In the game, a player is recorded drinking a large amount of alcohol and then nominates another person, challenging him to top the drinking feat by making his own video and posting it to a social networking site. Some of the videos from UT include a person taking seven shots in a row, a person drinking a six pack of beer in approximately five minutes and a person chugging a Four Loko, according to economics sophomore Ahmad Nassif.

At least five men younger than 30 have died after playing the game, according to CNN.

Jessica Wagner, University Health Services manager, said she has not heard of the game, but the small number of students who participate in binge drinking games draw far more attention from the general public than the 59 percent of students — according to UT surveys — who are moderate drinkers.

“Things like the neknominations can definitely influence perspective,” Wagner said. “There are [alcohol trends] that come around every semester even or every year that’s kind of the new alcohol scare.”

Nassif said he is friends with many UT students who have participated in neknominations, although he has never partaken. Nassif said he doesn’t think students would play the game if they couldn’t show off their drinking feats to their friends.

“You’re doing it just for others to see,” Nassif said. “I think half of [the motivation] is the pride and the bragging rights that comes with it.”

UTPD spokeswoman Cindy Posey said it is difficult for UTPD to prosecute underage students who participate in the game, although UTPD has jurisdiction if the video was filmed in Travis County, because there may not be enough probable cause to know a crime occurred without evidence other than the video.

“It would require more investigation to determine whether or not the person [was] actually consuming alcohol and becoming intoxicated, or simply pretending,” Posey said.

Sara LeStrange, dean of students communications manager, said the University can take action for on-campus violations, but Student Judicial Services does not have jurisdiction for off-campus crimes and offers amnesty from disciplinary action to students who call 911 in cases of suspected alcohol poisoning.