UT students put on production of “The Vagina Monologues” 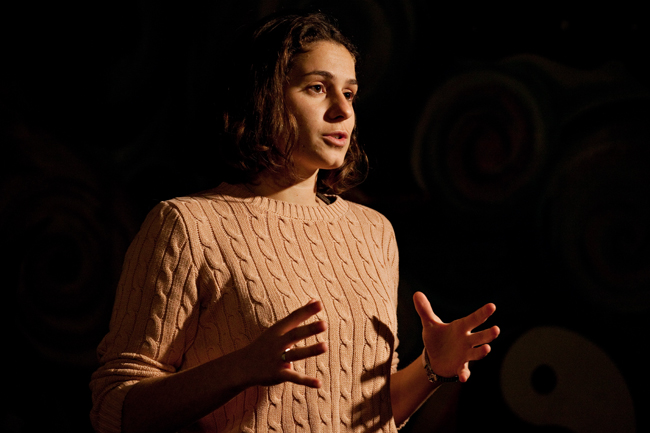 Agatha Secall rehearses her lines for “The Vagina Monologues,” an award winning production that raises awareness about violence against women. The production will take place Saturday and Sunday at the 21st Street co-op at 7 p.m. " />

Agatha Secall rehearses her lines for “The Vagina Monologues,” an award winning production that raises awareness about violence against women. The production will take place Saturday and Sunday at the 21st Street co-op at 7 p.m.

In an effort to raise money and awareness for women who are victims of violence, UT social work student Caroline Traylor decided to direct and produce a play.

After taking a women’s studies class and seeing “The Vagina Monologues” her freshman year, Traylor wanted to put on her own production of the award-winning play that’s mission is to end violence against women. The production takes place this Saturday and Sunday at the 21st Street Co-op at 7 p.m..

Roughly 20 years ago, playwright Eve Ensler traveled around the world and interviewed women about their vaginas and turned their stories into “The Vagina Monologues.” As part of V-Day, a movement committed to ending violence against women, all proceeds from the play go to an organization that promotes women’s rights.

For this weekend’s production, Traylor chose to donate the proceeds to Planned Parenthood and local nonprofit SafePlace.

“I’ve been volunteering at SafePlace and I chose it because it’s local and it provides health care to victims of sexual assault,” Traylor said. “They provide counseling and shelter, but they’re really big on community education and they recognize the power dynamics of the patriarchy that perpetuates violence against women.”

The monologues details issues like sexual assault, as well as humorous stories of women discovering their own anatomy. UT alumna and actress in the play, Claire Murphy Mayberry, said the stories are very candid about women’s experiences with their bodies.

“People are not going to come and have it be like the bible of feminism and an all-encompassing message,” Murphy Mayberry said. “They are going to find something different — it’s more imperfect than that. It’s just women talking about themselves and their bodies in a different way, and we don’t see that a lot, so it’s going to be a good conversation starter.”

Each monologue intimately tackles an issue surrounding women. Murphy Mayberry explained that part of the goal of the production is to force the audience to confront difficult and uncomfortable topics.

“It’s crazy to see how many people, especially young men, will be uncomfortable to see a woman on stage talking about her issues and her body,”
Murphy Mayberry said. “So, we hope to get people uncomfortable on a basic level and confront their discomfort to really tackle why they’re uncomfortable.”

Aside from entertaining, ‘The Vagina Monologues” aims to educate people about women’s anatomy and the challenges and experiences that surround it.

“I think that it’s a completely new way to look at women because a lot of the pieces and the moods that are going into the performance are both vulnerable but very strong and empowering,” said Kendall Edison, psychology senior and actress in the play. “So, you get to see this dynamic that you don’t get to see on a day-to-day basis that you may not be conscious of. It gives you a new way to think about your body and your experiences, whether you’re male, female or somewhere in between.”

The main goal of the play is to empower women and inspire people to internalize a deeper understanding and appreciation for women’s lives and bodies.

“I would have to say that the most important thing to take away isn’t necessarily that your vagina is beautiful and wonderful and does so many things and they all look different, but at the end of the day, you need to take the time to learn to love yourself,” Edison said. “That’s what gives you a glow, and I think that’s important. And everyone is different and that’s perfectly OK.”