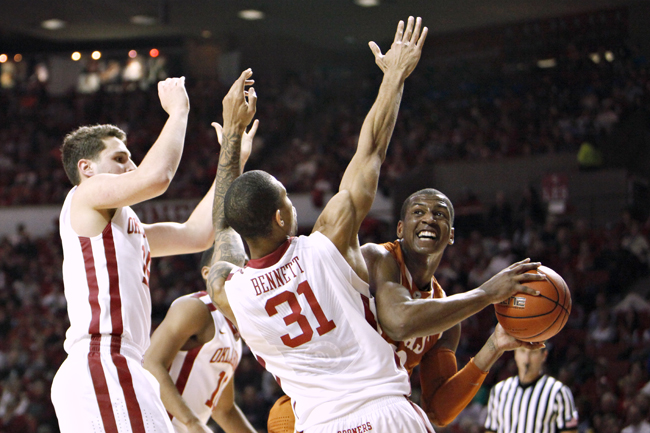 NORMAN, Okla. — With freshman standout Isaiah Taylor in early foul trouble, Texas head coach Rick Barnes was forced to find out what his offense was capable of without its starting point guard Saturday.

His answer? A calamity of errors. Sixteen turnovers later, the Longhorns found themselves on the losing end of yet another blowout on the road, dropping a 77–65 decision to the Oklahoma Sooners in Norman.

“The thing that bothered me most with the guards was the turnovers,” Barnes said. “Nearly every guard turned it over at least once and they scored 23 points off turnovers, so that was the difference in the game.”

Taylor committed two costly fouls in the first half and a third one early on in the second frame, sending him to the bench for much of the game. The Longhorns’ half-court offense was a disaster without his direction, hurling errant passes, tossing up ill-advised shots and struggling to run set plays.

“When you play away games, you can’t turn the ball over,” sophomore guard Demarcus Holland said. “You have to give yourself a chance to win. We shot the ball well so that wasn’t an issue. We just have to take care of the ball.”

Sophomore guard Javan Felix was tasked with replacing Taylor at the top of the Texas offense and couldn’t handle the responsibility. Felix often appeared frantic while running the offense, tossing the ball directly to a crimson and cream uniform on multiple occasions. Felix, a Louisiana native, finished with three turnovers compared to just two points on the afternoon.

The Texas backcourt’s inability to take care of the ball nullified a strong performance from the Longhorns’ interior presence. Led by sophomore center Cameron Ridley, who had 19 points and 14 boards for his eighth double-double of the season, Texas’ forwards combined for 42 points on 61 percent shooting from the field. Barnes’ big men clearly overwhelmed the Sooners, but the sloppy guard play proved to be too much to overcome.

“[The forwards] all played well today,” Barnes said. “I thought [Ridley] was terrific. He did a good job of getting his space and doing what he needed to do.”

The loss marks Texas’ fourth consecutive road defeat. The four setbacks have come by an average margin of more than 17 points per contest. With the Big 12 Championship and NCAA Tournament fast approaching, the Longhorns’ road woes are an obvious cause for concern late in
the season.

“Some of our guys don’t play with a toughness that they need to on the road,” Barnes said. “Turnovers and poor offensive play have been common over the course of these road losses.”