Louis Murillo might be the Texas Longhorns’ most dedicated fan 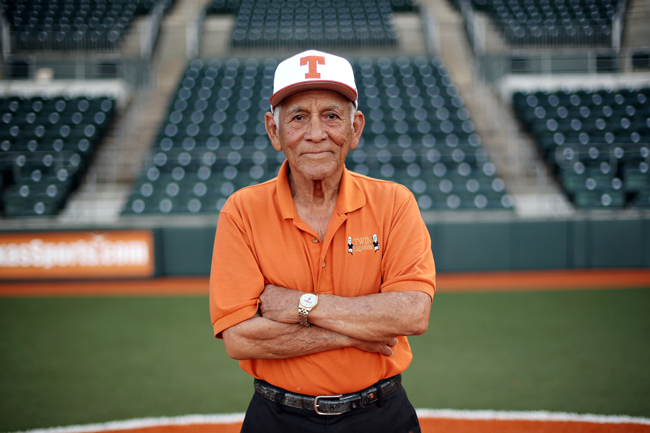 Since the age of 12, Louis Murillo has been a fan and worked for UT athletics. Now at 83, Murillo vividly recalls his personal relationship to players and coaches such as Darrell Royal and Mack Brown. Murillo can be found at any home baseball game at his favorite spot by the dugout.   " />

Since the age of 12, Louis Murillo has been a fan and worked for UT athletics. Now at 83, Murillo vividly recalls his personal relationship to players and coaches such as Darrell Royal and Mack Brown. Murillo can be found at any home baseball game at his favorite spot by the dugout.

Eighty-three-year-old Louis Murillo said he would never sell his home — not even for a million dollars. That’s because almost everything inside Murillo’s small, East Austin home is a remnant of a long, fruitful relationship with UT Athletics.

Every piece of clothing in view has a hint of the signature burnt orange on it. Portraits of star running back Earl Campbell and legendary football coach Darrell Royal populate the walls. In one photo, Murillo is smiling with Royal. In another, he has one arm around singer George Strait and the other around Willie Nelson. The final photo he shows depicts a smiling Gov. Rick Perry alongside Murillo.

“I’ve never voted for him, but he’s a nice man,” Murillo said.

Murillo has been attending UT games since 1953. In that time, he’s gone from an enthusiastic fan to Royal’s personal driver. Among his relics from the days is a letter written by former football coach Mack Brown.

“You’re a good man and we all appreciate you,” the letter said. “We’ll see you at practice soon.”

Murillo is currently employed as, and was initially offered a job as, a ticket “gopher” on the stadium grounds because he was a friendly face that was always around.

“The coaches would say, ‘Hey Louis — go for this,’ or, ‘Hey Louis, go for that,’ so they just called me a gopher,” Murillo said.

But, long before it was his job, Murillo lived and breathed Texas sports.

Murillo was born in Austin in 1931. After fourth grade, he dropped out of school to begin working when he was 12. The Thompson family, who owned a 7-Eleven in the East side of Austin, offered Murillo a job selling groceries.

“They were great people,” Murillo said. “I owe them a lot.”

When the Thompsons sent Murillo to the UT stadium grounds to sell sodas, he heard stories of the great UT quarterback Bobby Layne, whose accomplishments of the late ’40s and early ’50s drew the attention of millions, including Murillo.

In 1950, Murillo took a break from the Longhorns when he was drafted into the U.S. Army and deployed in Korea as a mechanic.

Sitting at his kitchen table, Murillo emptied a leather pouch into his hands, and several Army medals fell out onto his hands. He vividly remembers the moment he was told he was going home after 16 1/2 grueling months on the front lines.

When Murillo returned from Korea, he returned to his job at 7-Eleven. He began going to the football games as a spectator, not just to sell sodas. Over the years he became a familiar face at the stadium, and he built a rapport with the coaching staff. Al Lundstedt, the athletics department business manager, offered Murillo a job running tickets from the coaches to the ticket booths. Murillo soon became close friends with many Texas coaches, especially Royal. When Royal stopped coaching in 1976 but remained Texas’ athletic director, Murillo became his personal driver and friend. He goes so far as to call himself Royal’s “illegitimate son.”

Now, Murillo guards the dugouts at UT baseball games and guards the tunnel at the football games. He’s always standing close to the action, talking with the players and coaches, putting in his 2 cents and remaining the same friendly face that showed up at Texas games 61 years ago.

Murillo suffered a stroke the day before Christmas that left the left side of his body paralyzed, but that didn’t stop him from being at the season opener against Texas A&M-Corpus Christi. He attributed his speedy recovery to an active youth, when he boxed against future Olympians such as Lefty Barrera.

These days, Murillo can be found at any Texas home game by the dugout, talking with the players and cheering on the team that has meant so much to him over the years. And, just like with his precious home in East Austin, he doesn’t think he’s going anywhere any time soon.