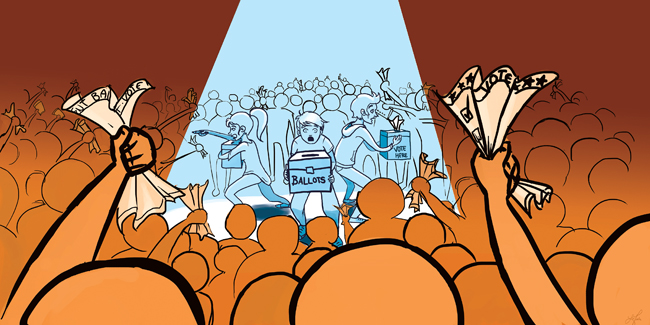 While some of the points on the duo’s platform are well-intentioned and, ostensibly, even supported by a majority of students, we must stop confusing “extended facility hours” and “renovating the PCL” as advancing notions of a student interest and recognize them for what they are: small-scale and overwhelmingly social measures that superficially engage, at best, with the existing operations of the University, operations which are controlled by administrators and The Board of Regents.

In some ways, however, this is not Kori Rady or Taylor Strickland’s fault.

By design, SG, as it exists today, is in no way an avenue to meaningfully advocate for the student interest at UT. With no power to pass actionable legislation in major University affairs, a dependence on administration for funding and space and the regents’ veto power over all resolutions passed by the student legislature, there are serious limitations to the system that prevent students from having a true voice in the operations of the University.

Students have a common interest in improving the conditions in which our learning takes place on campus. Proposals that address issues relating to the quality of life and University experiences of students — such as creating a University-wide homecoming and expanding the safe ride program, both of which featured on the Rady-Strickland platform — deserve attention and should rightfully be taken up by student organizations. But these are peripheral issues at best and have little to do with our purpose here as learners.

The more civically-minded issues proposed by Rady and Strickland, such as their support for the Invest in Texas campaign, a “student-led, non-partisan” group that advocates for student issues at the legislature, likewise fall short in promoting the student interest. Lobbying the legislature is futile when administrators control the small amount of funds the University ultimately receives.

As the University System with the third-largest endowment in the country and the largest of any public University, students who are supposed to be benefiting from these funds must demand greater control over how the existing budget is attained and allocated, while intensifying the pressure on the legislature to fully fund higher education. Non-voting student “representatives” on decision-making committees and boards, such as the so-called student regent that can “advise” the regents on tuition issues, do not constitute real student involvement.

Moreover, though Rady and Strickland are limited by structural barriers, their platform does absolutely nothing to define a vision for the University that differs in anyway from that of the administration. In fact, the second agenda item listed on their platform is titled “We Support Bill Powers.”

Rather than proposing a way forward for the University as imagined by students, our student leaders continually fall victim to the false choice we are presented: to side with the lesser-evilism of Powers or deal with recalcitrant regents. There’s no clearer indication of this than Rady and Strickland’s allegiance to our University’s president.

Nowhere do Rady and Strickland demand the dignity of professors, adjuncts and graduate students, who, like students, face a multitude of attacks from administrators, including limitations to their academic freedom, demands that they teach larger and larger classes of students and insufficient benefits and salaries. Instead, Rady and Strickland suggest we “light the tower to celebrate academic achievement” in order to “place equal significance on athletics and academics,” as if they should be equal to begin with.

Real student power does not involve simply having an “official voice through which student opinion may be expressed” as SG’s constitution dictates.  It means cultivating an understanding of our interests as students and ensuring that those interests fundamentally shape the organization of our University.

Griswold is a government senior from Indianapolis.