Texas breezes by Valparaiso 7-1 in first ever meeting 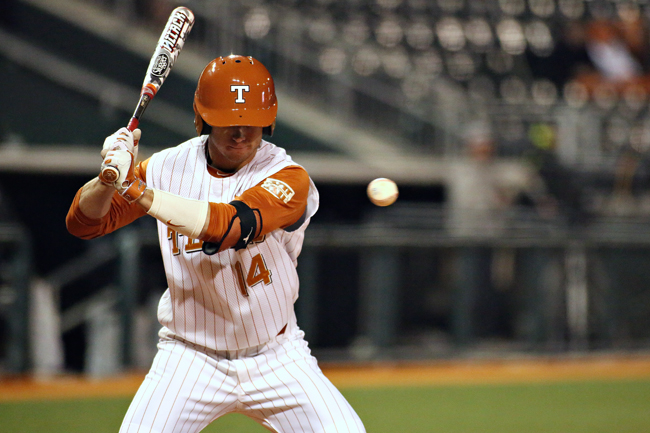 The plan was for sophomore left fielder Ben Johnson to hit eighth, putting speed at the bottom of the order, but head coach Augie Garrido accidentally turned in the wrong lineup card, one that had Johnson in the six hole.

“I filled out two lineups before the game,” Garrido said. “I didn’t realize I turned in the wrong card until I looked at the scoreboard.”

The mistake ended up being a blessing in disguise as Johnson had a big two-out, two-run single in the first to break open the game — a spot he wouldn’t have been in had Garrido turned in the right lineup card.

“I thought I was hitting eighth,” Johnson said. “But I came out and saw I was hitting sixth. I got a good pitch to hit and made the most of it.”

Led by Johnson, the No. 10 Longhorns beat Valparaiso 7-1 in the first matchup between the schools Tuesday night in front of a small, chilly crowd at UFCU Disch-Falk field.

Johnson accounted for four of Texas’ seven runs, finishing his night with two hits, two RBIs, two runs, one walk and one stolen base.

It didn’t take the Longhorns long to get on the board against a Valparaiso team (4-6) that entered the day with a 6.57 ERA. After a walk and a fielder’s choice, sophomore shortstop C.J Hinojosa punched an outside pitch from Dalton Lundeen (0-1) to the right to put runners on the corner and one out — a perfect situation for Augie-ball.

The cleanup hitter, freshman first baseman Kacy Clemens, laid down the safety squeeze to score senior center fielder Mark Payton for the first run. A few batters later, Johnson pulled one through the left side of the infield to give Texas an early 3-0 advantage.

“The three runs loosened everyone up,” Garrido said.

The Texas offense wasn’t finished after that, scoring four more runs by the end of the fifth.

The three first inning runs would have been enough for the collection of seven Texas pitchers, who combined to allow just one run on four hits.

Freshman pitcher Blake Goins (1-0), a 12th-round pick of the Los Angeles Angels out of high school, started things for the Longhorns on the hill, going three scoreless innings and allowing just one hit. Freshman reliever Josh Sawyer allowed the lone Valparaiso run in his one inning, a product of two walks and wild pitches, but he left the bases loaded to avoid further damage and sustain a 3-1 advantage.

In addition to Johnson’s strong day, junior second baseman Brooks Marlow did what leadoff hitters should do: reach base. In five trips to the plate, he reached four times.

“We have all the confidence in the world,” Johnson said.