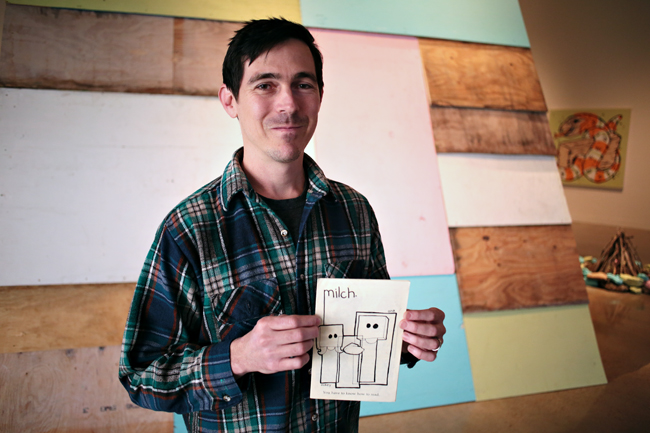 Zines, do-it-yourself magazines that were at peak popularity in the ’70s and ’80s, are regaining popularity at UT and across the nation.

The cultural reasons for this resurgence, as well as the overall cultural value of zines, is one of the topics of discussion for “Zines in the Scholarly World,” a panel talk Thursday at the Fine Arts Library featuring UT alumnus Michael Sieben and other zine experts.

“Zine is an abbreviation for the word magazine, so it takes a lot of different forms,” said Jason Urban, UT art lecturer and panelist for the discussion. “It’s a small press publication, generally made by an individual, and it’s expressing that individual’s concerns and points of view.”

Fine Arts Librarian Laura Schwartz has been collecting zines over the past four years and has accumulated about 100 photography and art zines primarily produced by Texas artists.

Schwartz discovered that current artist-in-residence Sieben has been making zines since college and incorporates them into his exhibit “It Will All Happen Again” at the Visual Arts Center.

“I stumbled across zines through skateboarding, which is something I have been very active in throughout my life,” Sieben said. “I remember seeing a skateboarding zine, and it was very eye-opening in the term that all of the magazines I had seen up to that point were promoting zines in California, and this one was made in Texas promoting the local scene.”

Sieben said his art has been influenced by zine making, but the craft also landed him his current job as managing editor for “Thrasher Magazine.”

“When you’re making a magazine that ships internationally, you’re trying to make it appeal to as many people as you can,” Sieben said. “But, with a zine, you can be very specific about what your interests are.”

Zines gained popularity when the photocopy machine was invented but became a less common form of art after the development of the Internet.

“The Internet appeared and blogs sort of took over the role of zines for a time, but they’ve had a comeback in the hands of artists and designers,” Urban said. “They are still used to share people’s personal ideas, but I think there’s a new generation of makers who are finding the idea of making a physical publication on their own really refreshing after years of working with computers.”

Schwartz attributes the comeback of zines to the recent resurgence of do-it-yourself culture.

“People are hungry for tactile objects because everything that we deal with is digital and electronic,” Schwartz said. “You see this everywhere with do-it-yourself culture. People have gotten back into using a typewriter. People are knitting again. There are just so many things people are doing that are physical, and I think this is just one of those things.”

In addition to Sieben’s exhibit, zines can be found in UT classrooms. There is a freshman UGS course called Zines in the Digital Age, and zines are one of the art forms taught in Two-dimensional Design — one of the lower division studio art classes — both of which Urban has taught.

“As part of the zine making class, the professor picks two or three of the best and then we add them to the collection, so, when they start the project, they know theirs might be picked to be added to the collection,“ Schwartz said.

In addition to the panel discussion this week, Sieben will hold a zine-making workshop April 12. Sieben said zines are a form of expression that anyone can publish and enjoy.

“There’s something very freeing about it,” Sieben said. “It’s obviously making something by yourself, so you can do whatever you want versus working with magazine or a book publisher where you have to work with art directors and editors. When you’re making a zine, it’s entirely your own voice.”