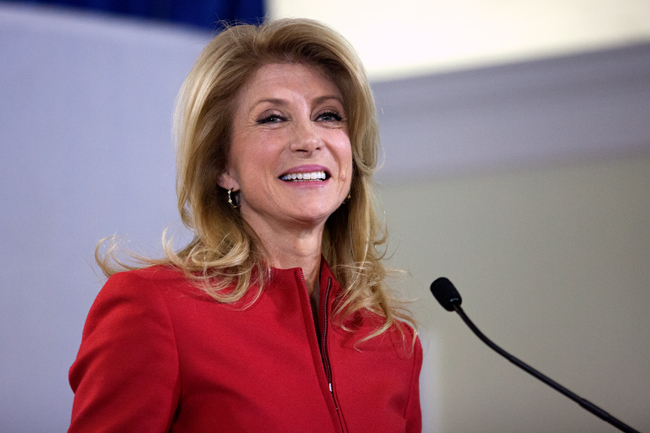 State Sen. Wendy Davis, D-Fort Worth, gives a speech at her victory party in Fort Worth after officially nabbing the Democratic nomination for governor Tuesday. Davis touted education and women's rights in her speech and will face Attorney General Greg Abbott in the general election.

FORT WORTH — More than 100 supporters chanted Democratic candidate Wendy Davis' name at her campaign headquarters as she secured a predictable victory in the primary elections Tuesday night.

Davis, who is currently the state senator representing Fort Worth’s District 10, led Democratic opponent Ray Madrigal with 76 percent of the vote compared to 24 percent at press time. According to a recent University of Texas/Texas Tribune poll, Republican candidate Greg Abbott, the attorney general, has an 11-point lead among likely voters.

Davis, who has mentioned education often during her campaign, said she wants to allow children an opportunity to succeed and move the state forward.

“I want to fight for our future,” Davis said. “As governor, I will fight to give our kids a 21st-century education.”

“He’s defending those cuts, cuts that laid off teachers and forced our kids into overcrowded classrooms,” Davis said. “I will be a governor that fights for all freedoms — not just some freedoms for some people.”

Over the course of campaigning so far, Davis has focused on education, a strong economy, government accountability and support for veterans.

Chris Turner, state representative for District 101, said Davis’ personal story was the reason her campaign was so important.

“She has a deep commitment to education,” Turner said. “She knows what good education opportunities did for her, and she wants to make sure every Texan has those same opportunities.”

Turner said he felt confident Davis would win the general election against Abbott.

“It will be a competitive general election, but I think [Davis] has an excellent chance to win in November because she is a different kind of candidate who is going to run a great campaign, and Texans are going to have a clear choice,” Turner said.

In January, the Davis campaign faced backlash as it was discovered that some details in her story of being a 19-year-old single mother and living in a trailer park were misstated. Maddy Bewley, a student at UT-Arlington, said she did not think this confusion would hurt the campaign any.

“I don’t think that affects the way she’s going to govern us,” Bewley said.

UT alumnus Patrick Doporto, who spent the day volunteering at the Wendy Davis Campaign Headquarters, said this was his first time voting in an election.

Doporto said Davis’ focus on education was the most important to him.

“Texas should be the charge in making the United States the education powerhouse again,” Doporto said. Doporto graduated from the University in 2013 with a degree in government and said he was apathetic about elections in the past because he just felt like an observer.

Davis rose to national prominence last summer after a 13-hour filibuster to block House Bill 2, a bill that tightened standards on abortion-providing facilities and resulted in the closure of many clinics across the state. Though Davis has not emphasized abortion over the course of her campaign, she did address Abbott’s anti-abortion stance in her speech.

“[Abbott] wants to dictate for all women, including victims of rape and incest, the decisions they should make,” Davis said. “I will be a governor who fights for the future of Texas. He is a defender of the status quo.”