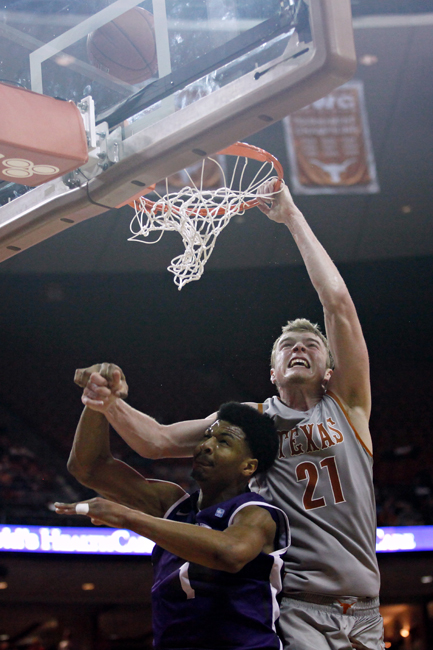 Filling in for the injured junior forward Jonathan Holmes, sophomore forward Connor Lammert made the most of the opportunity, recording a double-double in a 66-54 win over TCU at Tuesday night's game.

Not even beer could bring excitement to a lethargic matchup at the Frank Erwin Center on Wednesday night.

In the first game at which alcoholic beverages were served at a home Texas basketball showcase, the Longhorns took on a lowly TCU in front of a lackluster crowd. Texas outlasted the Horned Frogs 66-54 in the Longhorns’ last home game of the season.

“I think this was a good win for us,” freshman guard Isaiah Taylor said. “Coming off a tough loss at Oklahoma, we needed this one to help move us forward.”

Texas dominated most of the first half after sophomore center Cameron Ridley started the Longhorns’ scoring with a two-handed slam. Texas (22-8, 11-6 Big 12) was able to move the ball well and make open shots as it took an 11-5 lead to start the game.

The Longhorns had little trouble stopping the Horned Frogs (9-20, 0-17 Big 12) on defense, except for guard Kyan Anderson, who scored 18 of TCU’s 27 points in the first half. It wasn’t until the 5:20 mark in the period that another Horned Frogs player recorded a basket.

In the second half, Texas never trailed TCU, but allowed the Horned Frogs to hold onto hope of gaining their first Big 12 win. Both teams lacked energy and consistency as they exchanged baskets until Texas eventually wore down TCU.

Texas’ senior night — with no seniors — was led by Taylor with 21 points and five assists. The Longhorns were without starting forward Jonathan Holmes, who missed the game with a right knee injury. Both Ridley and sophomore forward Connor Lammert, who stepped into his place, recorded a double-double on the night. Ridley’s 14 points and 10 rebounds tallied for his third straight double-double while Lammert recorded a career-high 13 rebounds.

“Unfortunately we had to deal with Holmes being out again,” Lammert said. “But we know the team isn’t about one person. I knew my teammates would have confidence with me so I just went out there and gave it my all.”

The Longhorns have had little trouble at home this season. They finish with a 16-2 mark at the Frank Erwin Center, which is one shy of their single-season record for most home wins.

Texas, who has put a large focus on confidence, especially after trouble on the road, now has a chance to finish tied for second in the conference if it can win its last regular season game against Texas Tech at 3 p.m. on Saturday in Lubbock.

“I don’t think our guys have lost any confidence,” head coach Rick Barnes said. “Why wouldn’t we be [confident]? We got a group of guys that on Saturday have a chance to finish second in the best conference in the country.”