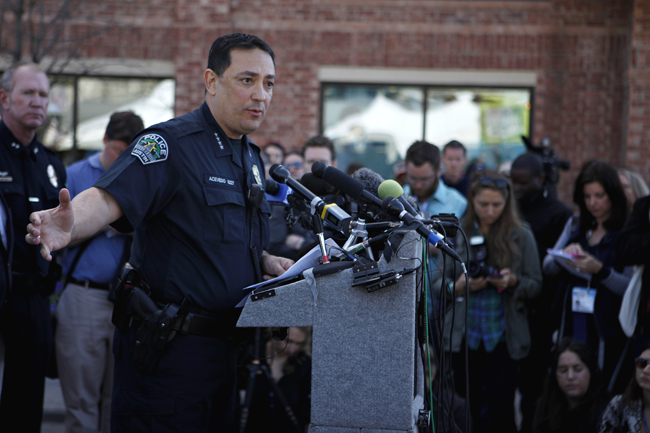 APD Police Chief Art Acevedo at a press conference Thursday morning addressing the car incident from the night before that left two people dead and 23 injured at the intersection of Red River and 9th streets amid SXSW activities.

Updated (Friday, 7:15 p.m.): Travis County district judges issued a formal arrest warrant Friday afternoon for 21-year old Rashad Charjuan Owens, who has been accused of driving his car through a crowded area of downtown during SXSW activities, killing two people and injuring 23 others. Owens was charged with one count of capital murder and bond has been set at $3 million.

Initially, APD Police Chief Art Acevedo said Owens would be charged with two counts of capital murder, which is a felony, and multiple counts of aggravated assault with a vehicle. So far, no other charges have been filed.

Earlier Friday, police officers released a statement clarifying that in Texas, capital murder is defined as two or more deaths in the same “criminal transaction.”

According to the police affidavit, Owens attempted to evade police because there were other warrants out for his arrest.

“Owens … said that he got scared because he has warrants and didn’t want to go to jail for 5 years for something he didn’t do,” the affidavit said. “Owens said that he has Kidnapping warrants and explained that he was part of a custody battle for his daughter.”

“Victims were reported to have been flying everywhere as they were being struck by the Honda,” the affidavit said.

Updated (Thursday, 8:52 p.m.): Christopher Ziebell, emergency department director of University Medical Center-Brackenridge, said Thursday night that he was concerned about the recovery prospects for the most critically injured victims of the SXSW crash.

“The two most critical patients, I have a great deal of concern and worry about,” Ziebell said at a press conference. “We’re going to do our best for them, but these are some of the worst injuries that we see, and not everybody with these kind of injuries is going to survive.”

Seven of the 23 people injured in the crash were taken to the medical center from the scene. An eighth person came to Brackenridge from another hospital after the person's injuries proved more serious than doctors initially realized, Ziebell said.

The two individuals who died were 35-year-old Steven Craenmehr and 27-year-old Jamie Ranae West. West's husband, Evan West, is among those who were injured and transported to the hospital.

Earlier Thursday afternoon, Reverends Katie Wright and Bob Gribble of St. David’s Episcopal Church hosted a vigil for the crash victims, with about 30 people in attendance. 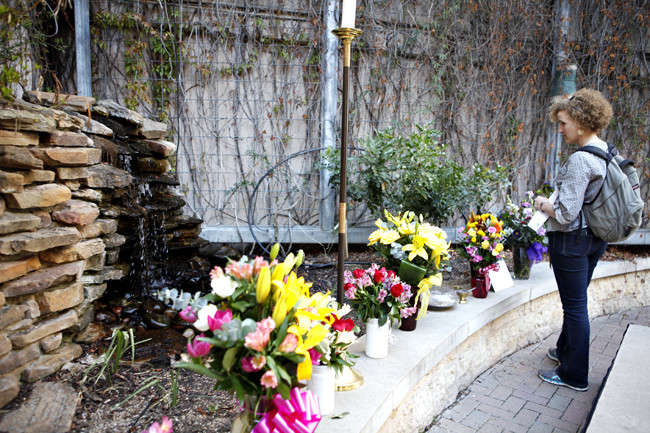 Michelle Marshall, a SXSW attendee from Austin, said she was disturbed by the unexpected crash.

“I come every year and this accident just kind of put a damper on the whole weekend — I felt like I needed to pay my respects,” Marshall said. “There’s just a very reverent feeling in town now.”

In an address, Wright said she hopes the community can reflect on the tragedy, while also appreciate the positive aspects of the festival.

Updated (Thursday, 1:40 p.m.): Austin police officials have named 21-year old Rashad Charjuan Owens as the driver who allegedly struck more than 20 individuals, killing two, with his car while speeding down Red River Street at SXSW after midnight on Thursday. Owens was charged with two charges of capital murder by terroristic threat, a felony-level offense, and multiple counts of aggravated assault with a motor vehicle. Owens was processed at Travis County Jail at 5:44 a.m. No bond has been set.

While many SXSW activities will continue, St. David's Episcopal Church at 301 E. Eighth Street will host an open prayer service for the victims at 5:30 p.m.

The car incident killed two people and injured 23. One of the victims who died was 35-year-old Steven Craenmehr, a creative director for the international branding and promotion company, MassiveMusic. The identity of the woman who died has not been revealed by the police.

The Mohawk, which is located right by where the incident took place, has canceled all of its afternoon events though it has not announced a plan for the evening events. APD will also be closing Eighth and Ninth streets from the I-35 frontage road to Neches Street at 5 p.m, though access to the frontage road will not be affected.

International relations sophomore Rush Evans, who was inside The Mohawk at the time of the crash, said the events were barely noticeable from inside the venue.

“No one seemed to notice that anything weird was happening,” Evans said. “Everyone was just going on their way having a good time.”

Evans said his view from the balcony allowed him to watch the first responders react to the scene.

“It literally looked like something just pulled through there and moved everyone out of the street,” Evans said. “People were lying on the sidewalks almost exclusively. It was pretty disturbing to see a little blood.”

Evans, who is a native of Austin, said he did not anticipate such a serious incident would happen at the festival. He said he was shaken by his proximity to the crash.

“If I had gotten there 5 minutes later, it could have been me,” Evans said. “I would have been in that line the car plowed through.”

Earlier Thursday, Fort Hood soldier Andrew Barmwell filed a police report for a stolen vehicle with the Killeen Police Department, according to Chris Haug, media relations chief at Fort Hood. Haug said Barmwell believes his stolen car, a gray Honda Civic, may be the one used in the crash. Barmwell was not available for comment.

Updated (Thursday, 11:50 a.m.): MassiveMusic, an international music branding and promotion company, identified 35-year-old Steven Craenmehr as the man who was killed in the car incident. Craenmehr worked as the creative director for the Amsterdam, Netherlands-based company.

"During the eight years that Steven worked for MassiveMusic, we got to know him as an unstoppable force, full of life, love and laughter," the company released in a statement on its website. "This is an irreplaceable loss for the MassiveMusic family and we are grateful for the years we spent with him."

Updated (Thursday, 11:26 a.m.): At a press conference Thursday, SXSW managing director Roland Swenson said SXSW operations would not be affected by the early-morning car crash that resulted in two deaths and more than 20 injured pedestrians.

“As much as we would just like to go home and spend time absorbing the shock of this horrific event, we feel our best use is to continue operating today,” Swenson said.

APD police chief Art Acevedo said the police originally incorrectly reported the identities of the deceased people. Though the suspected driver struck a man and a woman on a moped, only the woman, who Acevedo said was from Austin, died.

“The male driver is actually stable and in good condition,” Acevedo said.

Of the five patients originally reported as being in critical conditions, at least two are still critical, while the other three patients are in surgery or being evaluated, according to James Shamard, chief of staff for Austin-Travis County EMS.

Acevedo and other city officials, including Austin Mayor Lee Leffingwell, praised the efficiency of the first responders to the scene.

“I want to acknowledge the excellent performance of our first responders,” Leffingwell said. “There were about 25 people involved, and the incident was cleared from the street in less than 15 minutes.”

Leffingwell said city officials do everything they can to promote the safety of SXSW attendees.

“SXSW is a long-time event, 27 years, and this is the first time in 27 years we’ve had an incident of this kind,” Leffingwell said. “We will continually evaluate our events to make sure they’re as safe as they can possibly be.”

Daytime events will go on as planned, while planners at Mohawk Bar and Cheer Up Charlie’s, where the crash occurred, are still determining the best course of action, Swenson said. 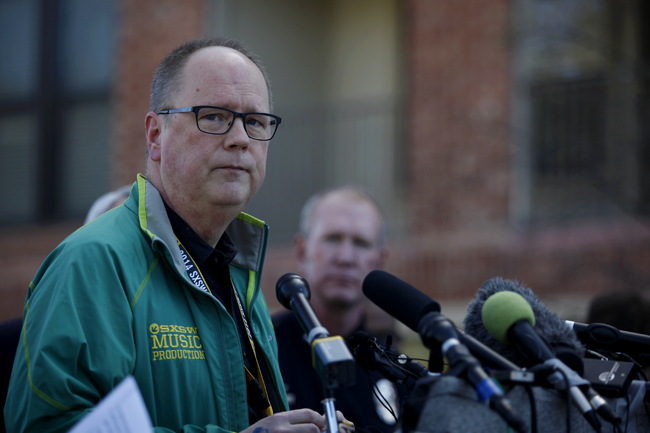 Original story: At least two people died and more than 20 were injured after a car ran through the intersection of 9th Street and Red River Street during South By Southwest just past midnight on Thursday, according to the Austin Police Department.

The incident took place right outside The Mohawk, a bar and live music venue.

At 2:15 a.m., APD reported that it had apprehended the suspect driving the car by tasing the driver. The driver, who has not been publicly identified, struck multiple people, as well as a taxi cab. A man and a woman who were riding a moped were pronounced dead on the scene. In total, there were 23 victims, five of whom were in critical condition. APD Police Chief Art Acevedo said the driver will be charged with two counts of capital murder, as well as 23 counts of aggravated assault with a vehicle.

“You cannot stop a person that decides rather than face potential drunk driving charges, at a high rate of speed, shows total disregard for human life,” Acevedo said. “That’s why we will be charging two counts of capital murder.”

In a joint press conference, Acevedo and Harry Evans, Austin Fire Department chief of staff, said the incident began when an APD officer initiated a traffic stop outside the Shell Gas Station on the intersection of I-35 and 9th streets. The driver weaved through the gas station lot and accelerated against the flow of traffic on 9th Street. When APD officers tried to overtake the vehicle, the driver took a right turn down Red River Street at a “high rate of speed,” Acevedo said. 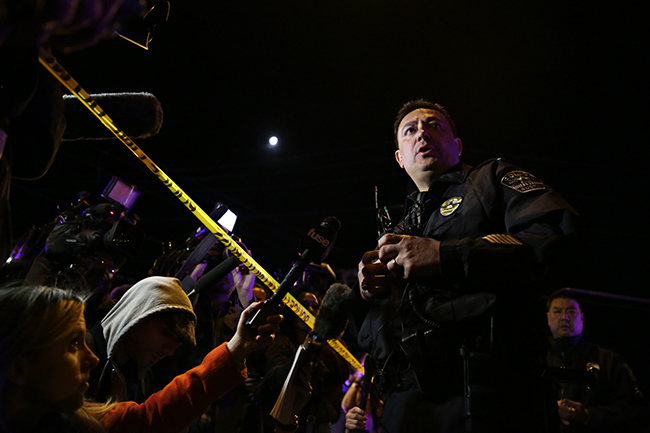 “The gas station, as you can imagine with all the activities around, was very busy,” Acevedo said. “He was in a smaller vehicle, he was able to weave his way through.”

“We had an Austin police officer in uniform working barricade patrol, and he was forced to move out of the way to avoid being struck himself,” Acevedo said. “The suspect driver then accelerated down Red River Street, and at a high rate of speed struck multiple pedestrians.”

Acevedo said the chase ended after the driver crashed at the northwest corner of 11th and Red River streets.

“[He crashed] into a parked van, and then he exited the vehicle and attempted to flee on foot,” Acevedo said. “The officer was able to overtake him on foot, and was actually forced to tase him to take him into custody.”

Mike Benavides, Travis County Emergency Medical Services spokesman, said EMS worked with 25 patients, including five who were in critical condition. Benavides said those five people had been transported off the scene within 15 minutes.

"This traffic management plan is a plan that has worked for years," Benavides said.

The area between the I-35 access road and Neches Street, and stretching from 10th to 11th Street, will be closed for most of Thursday.

Acevedo said the incident was unlike anything he had seen before as police chief. 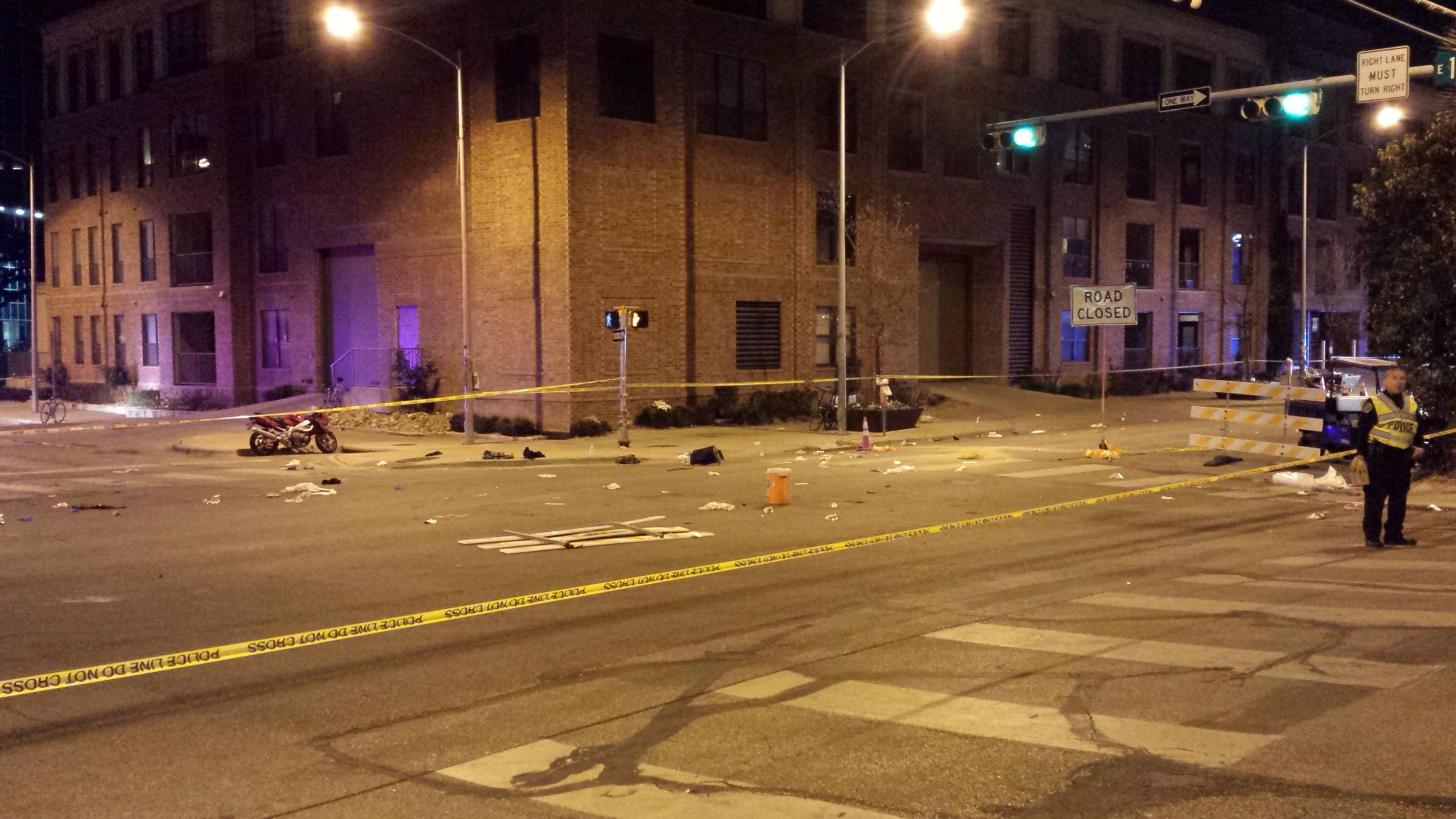 A blocked off portion of the street following in the incident taken around 1 a.m. on Thursday. ​Photo by Cameron Peterson / Daily Texan Staff

“Nothing like this has happened at SXSW in the seven years [I’ve] been chief officer,” Acevedo said.

Computer science senior Calvin Lau was lined up at The Mohawk to watch rapper Tyler the Creator perform. Lau saw the police cars and witnessed some of the aftermath of the incident.

"It really just came out of left field for me," Lau said. "I didn't hear of anything like this happening before. I don't think anybody saw that coming."

Correction: An earlier version of this story misstated the nationality of the man who died in the incident. The man is from the Netherlands.