Movie Review: ‘The Raid 2’ is one of the best action movies ever made 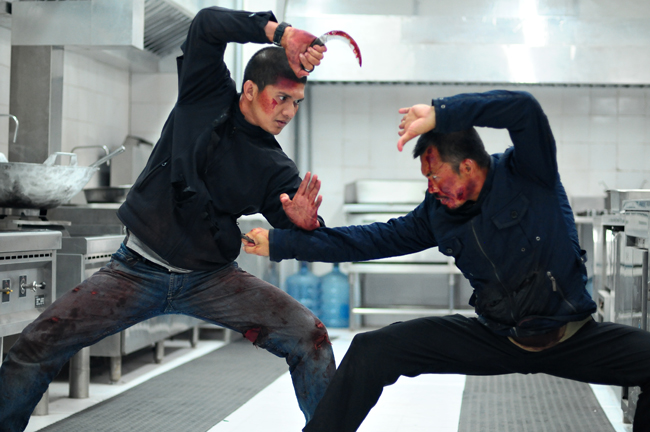 “The Raid” was both a stone-cold classic and an ode to narrative simplicity, executing its tried-and-true concept with bone-crunching efficiency. The sequel isn’t content to rehash the first film, and ups the stakes across the board. “The Raid 2: Berendal” begins only a few hours after the first time, as Rama (Iko Uwais) deals with the repercussions of punching half of the Jakarta crime syndicates to death. He’s sent undercover to infiltrate one of the city’s major crime families, and this means landing himself in prison and leaving his wife and newborn child behind.

While Uwais does a good job dealing with the regret of abandoning his family, he’s much better at pummeling his way through an endless stream of henchmen over the course of the film. One small detail about his performance was that Rama never fires a gun — and it’s an intentional touch — as Uwais is a tremendous physical performer, a seemingly unstoppable flurry of fists and feet, and giving him a gun would be like rigging the game. While Uwais doesn’t get much dialogue, writer/director Gareth Evans is such a strong visual director that he’s able to use Uwais’ quiet intensity to carry the film between action sequences.

The biggest complaint lobbied against “The Raid” was its thin narrative, and the sequel brings a welcome complexity to its familiar story of fathers and sons embroiled in the crime world. While no one will be saying this is the most groundbreaking narrative of the year, “The Raid 2”’s plot blends elements of “The Departed,” “The Godfather” and several other genre staples to create an exciting narrative that never feels like Evans padding the film out between action sequences. Instead, it’s a story with genuine emotional hooks, and each action scene has a place and purpose in the story.

In addition to being narratively relevant, the action sequences in “The Raid 2” are also among the best ever put to film, thrilling and distinct and staged with stunning clarity of purpose and geography. Evans pulls off a trick that few action directors are capable of, letting the action beats in this film tell us something about the characters and setting up formidable opponents for Rama, like the deadly Hammer Girl — you can probably guess what her favorite implement of destruction is.

Over the course of “The Raid 2”’s 149 minutes, there are easily a dozen distinct action scenes, and none of them feel pointless and perfunctory. While the first film focused on hand-to-hand combat, Evans plays in new arenas here, staging a visually striking showdown in a muddy courtyard or a car chase that has multiple shots that defy the laws of science and are all the better for it. Another factor cranked up from the first film is the brutality quotient, and “The Raid 2” is positively teeming with spilled blood and broken bone, climaxing with a final showdown in a kitchen that somehow makes arterial spray feel triumphant.

It’s easy to throw around the word masterpiece — and I already have this week, in a review for Richard Linklater’s “Boyhood” — but it’s hard to argue that “The Raid 2” doesn’t fit the description. The film succeeds in everything it attempts, telling a more cohesive, ambitious story than its predecessor, with a sharper narrative and infinitely more impressive action sequences. It’s hard to find faults with a work as completely and utterly awesome as “The Raid 2: Berendal,” and even if the film isn’t embraced as a masterpiece, it’ll be an instant classic of action cinema.