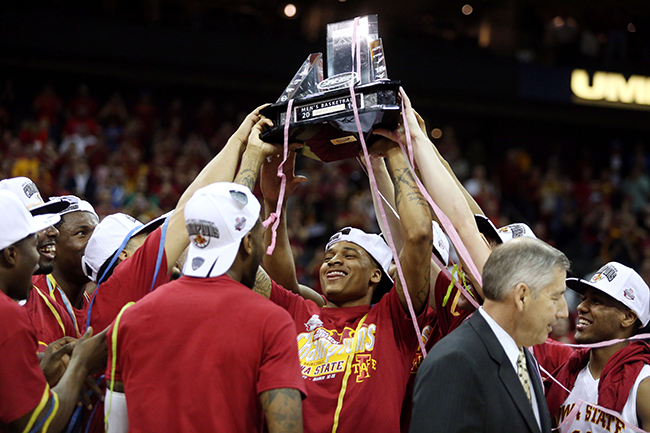 In front of a sea of cardinal and gold at the Sprint Center in Kansas City, the Iowa St. Cyclones slipped past the Baylor Bears, 66-60, in the Big 12 tournament championship game on Saturday night.

The conference tournament championship was just the second in the program’s history and the first since 2000.

The Cyclones were led by the tournament’s Most Outstanding Player, DeAndre Kane, who had 17 points and seven rebounds in the game. Four other Iowa St. players scored in double figures, including all-tournament team members Melvin Ejim and Georges Niang.

Just as it was against Texas on Friday, the Baylor zone defense was very effective early on against the Cyclones. Iowa St. missed their first 13 shots and the Bears held them to just one field goal on their first 16 attempts from the field. But, as the game wore on, Iowa St. began to find a rhythm from three, opening up opportunities inside for Niang and Ejim.

The Bears were lead by Kenny Chery and Brady Heslip in the losing effort. The two Canadian’s combined for 30 points, including several three-pointers that kept Baylor ahead in the first half.