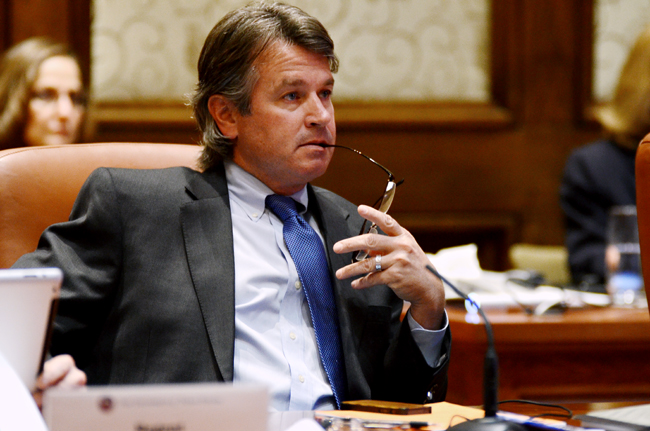 In an email to UT System Chancellor Francisco Cigarroa, Paul Foster, chairman of the UT System Board of Regents, suggested Regent Wallace Hall accused Cigarroa of not doing his job weeks before Cigarroa announced his resignation.

Foster praised Cigarroa in the email, which was originally obtained by The Dallas Morning News, and said “virtually all” of the regents appreciated the work he did as chancellor.

“I absolutely do not agree with [Hall’s] tactics in trying to pressure you into taking an action that you do not feel is in the best interests of UT-Austin or of the UT System,” Foster said in the email. “It is clear what he hopes to accomplish, but to disparage your reputation in the process is neither fair nor is it appropriate.”

State Rep. Trey Martinez Fischer, D-San Antonio, a member of the legislative committee investigating Hall, submitted a letter Friday to State Reps. Dan Flynn, R-Canton, and Carol Alvarado, D-Houston, after he saw the email, asking them to reconvene to hear testimony from Cigarroa and Foster.

Flynn and Alvarado are co-chairs of the House Committee on Transparency in State Agency Operations, which is trying to determine whether Hall overstepped his duties as a regent and whether he should be recommended for impeachment. Hall filed open records requests with UT for more than 800,000 pages of information and has been accused of conducting a “witch hunt” to oust President William Powers Jr.

Martinez Fischer said Foster’s email raises questions about Cigarroa’s true motive for resigning, and testimony from Cigarroa and Foster could provide the committee with answers. In December 2013, Cigarroa testified in front of the committee and said Hall’s actions were disruptive to the System and caused a drop in morale.

Alvarado said the committee will consider Martinez Fischer’s request, but no decision has been reached about reconvening.

“I have not talked to the other committee members or my co-chair about [the letter], but it’s something that I hope we will have discussions about,” Alvarado said. “We were hoping our report would be done soon, but, again, we have stressed all along that we are not in a rush. We want to make sure that we’re being thorough and that we don’t leave anything uncovered.”

In February, Martinez Fischer sent a different letter to the committee co-chairs addressing his concerns about Cigarroa’s true motives for stepping down, especially in light of other System employees resigning — including Barry Burgdorf, who resigned as the System’s general counsel in March 2013.

“I am concerned that, without proper leadership and experienced staff, there will be continued communication and administrative issues between the Board of Regents and the component institutions of the System,” Martinez Fischer wrote in February.

In February, Cigarroa said he is resigning as Chancellor in order to pursue medicine full time. He said the existing tension between the board and Powers did not factor into his decision.