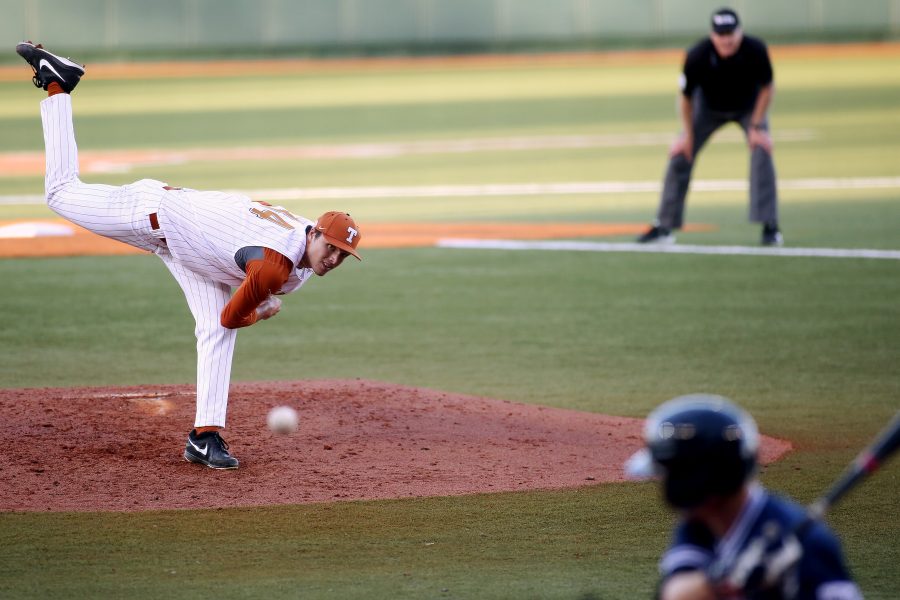 It was fitting that, on the first day of spring football practice, DBU was on the scoreboard at Disch-Falk Field. But this DBU was for Dallas Baptist, not the Longhorns’ secondary.

With the way junior Lukas Schiraldi was pitching, it might as well have been junior cornerback Quandre Diggs or sophomore cornerback Duke Thomas hacking away. Schiraldi (3-1) shut out the Patriots in his eight innings as the Longhorns won 5-0 Tuesday night.

Schiraldi, behind his two-seam fastball, allowed just two hits on the night, turning it over to his offense quickly.

“We threw a ton of changeups,” Schiraldi said. “I had a lot of confidence in it. They were taking big hacks; make them hit it into the ground.”

Texas (15-6) jumped on the board early against Dallas Baptist (15-4) on a first-inning RBI triple by senior outfielder Mark Payton. The triple drove in junior infielder Brooks Marlow, who led off the inning with a walk, ruining Dallas Baptist’s 30-inning scoreless streak.

“[Scoring first] takes a huge weight off my shoulders,” Schiraldi said. “It allows me to pitch to contact.”

The Longhorns tacked on two more in the third on a pair of two out hits. Before that, though, it appeared the inning was over. Sophomore outfielder Ben Johnson was called out trying to steal third, and Dallas Baptist began jogging off the field.

Then the umpire reversed his call — calling a juggle on the third baseman’s catch — and the Longhorns were back in business. Payton walked to put runners on the corner and was followed by a hard single by sophomore infielder C.J Hinojosa to drive in Johnson and a double down the right-field line from junior outfielder Collin Shaw.

Shaw, who has started less than half of Texas’ games this season, is starting to rise in the order as his batting average balloons. In his first two seasons with Texas, Shaw hit .128 and .222. This season, he was on the same pace until a hot stretch vaulted him up the lineup. In the last seven games, he has hit .389.

“The scope of our offensive game is good enough to beat anyone,” Garrido said. “We just have to execute, and we did that tonight.”

But just one was good enough for Schiraldi, who continues to establish himself as a solid starting option for the Longhorns.

“I love being able to start,” Schiraldi said of his demotion from the weekend rotation. “Being a Tuesday guy is no different. I still get to pitch. I love it.”