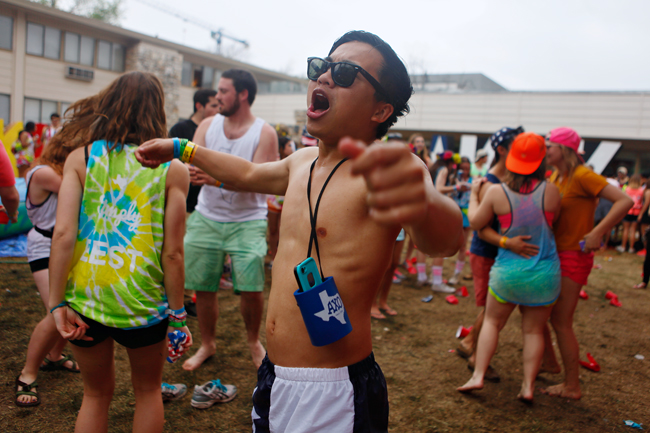 The University Panhellenic and Interfraternity councils distributed 20,000 wristbands to students bearing college IDs for the annual Greek event Roundup, a collection of parties and philanthropic events that began Thursday and lasted until Saturday night. Roundup, an event that began in the 1930s, stopped being an official University event in 1990 after a slew of controversial race-based incidents. The weekend meant heightened police presence in West Campus, with a noticeable increase in city police and security officials.

The Interfraternity Council, which serves as the governing body for 25 men’s social fraternities, helped issue wristbands to ensure Roundup attendees are verified college students. In the photo above, Roundup attendee Austin Nguyen enjoys a Crawfish Boil hosted by Acacia Fraternity, which featured performances by Brandon Ray and Highway Run.

Other musical performances included a show by Waka Flocka Flame hosted by Alpha Tau Omega and a show by Yung Joc hosted by Delta Tau Delta.

“This year, they were giving fines to fraternities for being over capacity,” Cao said. “They were pretty active Saturday night shutting down parties, and I saw a few people get arrested as well, which I didn’t see last year.”