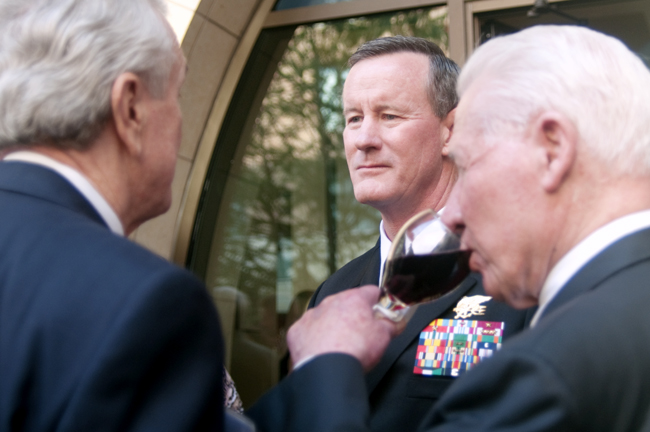 U.S. Navy Admiral William H. McRaven, who led the mission that killed Osama bin Laden in 2011, pictured here at the Champions of Justice Gala Benefitting Veterans in May 2012.

Naval Adm. William McRaven will deliver the address at UT’s Spring Commencement on May 18, the University announced Monday afternoon.

McRaven, known for his leadership of the military operation that led to the death of Osama bin Laden, graduated from UT in 1977 with a bachelor’s degree in journalism and a minor in Middle Eastern Studies.

In 2012, McRaven received a Distinguished Alumni Award from the Texas Exes, the University’s alumni organization. The same year, he was a keynote speaker at the Texas Access to Justice Commission’s Champions of Justice Gala Benefiting Veterans, which helped fund legal services for low-income veterans in Texas.

“Admiral McRaven is one of the great Americans of our time, a Distinguished Alumnus and a quintessential model of discipline and leadership,” President William Powers Jr. said in a statement from the University. “I’m thrilled that our graduates will have the benefit of his wisdom as they embark on their own journey.”

McRaven has served in the Navy for 37 years and has contributed to a variety of projects, including the development of an “Iron Man” advanced combat suit. McRaven currently commands 67,000 special operations forces around the world.

“If there is a lesson to be learned from me being invited to speak at this commencement, it is that the University is not only about the strength of your GPA, your class standing or your accomplishments on the field, [but] about how it prepares you for life,” McRaven said in a statement.

Bobby Inman, professor in the LBJ School of Public Affairs and former director of the National Security Agency, has known McRaven for the past five years and said he is an exceptional individual.

“He is a warrior,” Inman said. “Not only is he incredibly physically fit, [but] he can think fast on his feet. And I can promise you he has not — despite all of the places he has gone and all of the things he has done — lost any of his affection for UT-Austin.”

Andrew Clark, Senate of College Councils president, worked alongside other student leaders and administrators on the committee charged with selecting the commencement speaker. He said McRaven’s status as an alumnus and his extensive military service contributed to their decision.

“He’s a military man,” Clark said. “His sense of integrity will show. That’s something we get a lot of from military leaders. He’ll also bring leadership certainly, he’s been in high-stakes and high-profile situations and he’s had to lead under those circumstances.”