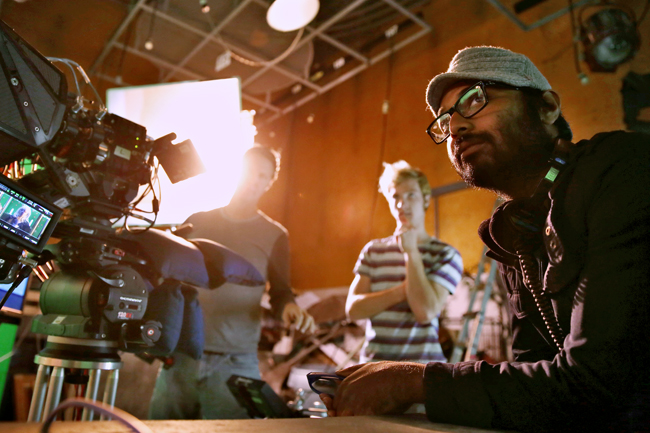 Radio-television-film graduate student Deepak Chetty directs on set of the University’s first 3-D film Monday night. The movie is a part of UT’s UT3D, a program for students interested in learning about 3-D production techniques and is currently the only 3-D program in the country offered to students " />

Radio-television-film graduate student Deepak Chetty directs on set of the University’s first 3-D film Monday night. The movie is a part of UT’s UT3D, a program for students interested in learning about 3-D production techniques and is currently the only 3-D program in the country offered to students

In the secluded spaces of the CMB, surrounded by bright lights, vibrant green walls and a rolling camera, a solemn moment transpires between a man in black battle gear and a futuristic-looking woman with pink hair. Through the use of special cameras, 3-D glasses and special effects, Deepak Chetty, radio-television-film graduate student, is in the process of making the University’s first 3-D film.

In fall 2013, UT’s radio-television-film department began UT3D, a program for students interested in learning about 3-D production techniques. Funded by the Moody Foundation to run for at least five years, it is the only 3-D program in the country offered to students.

The program is not meant to take attention away from the curriculum students already have planned. It is a sequence of two courses — one introductory and one advanced — and a required internship or special project that can be integrated into a student’s degree plan. With around 40 undergraduate students currently in the program, UT3D is not only available to radio-televsion-film majors. Applying to the program is possible for those with an interest and background in film. Applications for fall 2014 will close Monday.

Chetty, who is in his fourth year of graduate school, is using the teachings and technologies that the UT3D program offers to create an action-packed science-fiction thriller for his thesis project. The short film, titled "Hard Reset," will feature a young detective who is at the crossroads of an impending artificial intelligence revolution and is forced to choose between two sides. Because of the large amount of special effects being used in the film, it will not be completed until August.

“My original intent was just to shoot it 2-D,” Chetty said. “But, basically, the timing was just right to get to do it in 3-D, and I couldn’t be more thankful for the experience.”

After completing his undergraduate degree at Pratt Institute in New York City, Chetty remained there until coming to UT in 2010. During his time in New York, he worked in the film and television industry doing mainly freelance work and specializing in special effects tests. Directors of the UT3D program allowed for Chetty to take part in the new development because of his extensive background in the industry.

“So much more than any other student here, Deepak [Chetty] was prepared to do this,” said Don Howard, radio-television-film associate professor and director of the UT3D program. “So, we were like, ‘Yeah let’s do it.’ It’s the kind of film you expect to see in 3-D.”

UT3D is not restricted to students who wish to work in only action and science fiction. The program is meant to broaden the range of genres created using 3-D technology.

“Most people have a knee-jerk reaction when they hear the term ‘3-D,’ thinking that it’s just explosions and that sort of thing,” Howard said. “It’s useful in those environments but it’s not just that.”

As the first graduate student working with the program, Chetty has found UT3D to be a great opportunity and believes it is a good addition to the University.

“It’s a good way for the school to test out advanced work flows and advanced production situations,” Chetty said. “I just think it’s a really cool thing to happen at UT right now just because we’re basically pioneers in this field.”