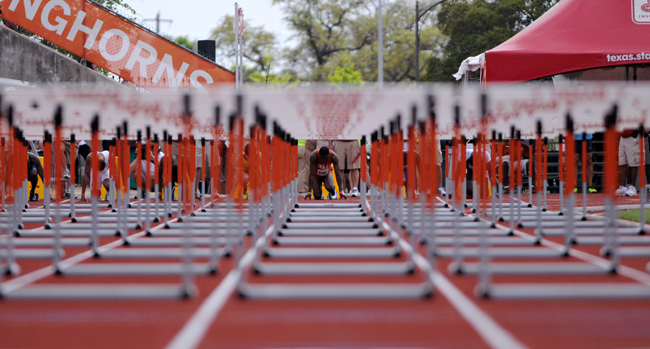 This week’s Texas Relays marks the beginning of outdoor competition for the Longhorns. The meet, which takes the top athletes from 652 high schools, 232 colleges and nine countries, will show how Texas stacks up against elite competition.

Heading into his first outdoor season as head coach, Mario Sategna knows how important the Texas Relays can be.

“You set the tone early,” Sategna said. “It sends a message to not only the conference, the Big 12 but also [the nation].”

The meet is the outdoor season debut of national champion sophomore pole-vaulter Kaitlin Petrillose and the rest of the Longhorn NCAA Indoor National Championship team.

“Just the fact that you’re outside on a track and it’s only one lap, I feel like it just makes it faster,” Okolo said.

Due to the surgery, the right-handed Hock will throw the javelin with his left hand. Despite this tweak in his style, Hock is excited for what’s to come this season.

“Indoors is always a little different for us because we train outdoors year-round,” Hock said.  “I think Texas Relays is going to be the first meet where we can really show what we’ve been working on in the winter.”

The competition will take place Wednesday through Saturday at Mike A. Myers Stadium.