Longhorn bats wake up in run-rule win over Islanders 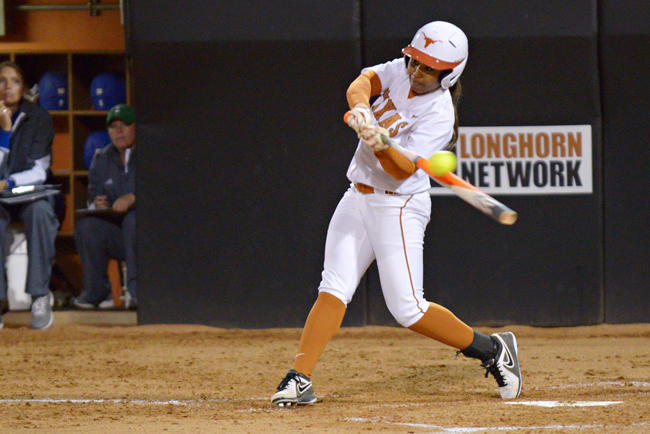 With a break from conference play this weekend, head coach Connie Clark said she was pleased with the way the team came out against the Islanders.

“We need to make sure that, on these two nonconference games, as well as our practices, that we’re very intense and we have a sense of urgency, so we can finish out conference [play] strong,” Clark said.

The Longhorn offense, which at times has started slow, got off to a quick start with senior centerfielder Brejae Washington getting on base with a bunt and then stealing second on the next pitch. Sophomore right fielder Lindsey Stephens put the Longhorns ahead with an
RBI double.

Freshman pitcher Tiarra Davis and sophomore first baseman Holly Kern each added an RBI hit to extend the Texas lead to 3-0 after
one inning.

Clark said although Texas can’t score every time in the first inning, the team has talked about winning every inning.

“I like their approach,” Clark said. “That’s taking them to a heightened sense of awareness that they need to push every inning like it’s the seventh inning.”

In the third inning, the Longhorns would break the game wide open. Like the first inning, senior shortstop Taylor Thom led off with a single and a stolen base and would score on a single by Davis. Senior catcher Mandy Ogle blasted a two-run home run to left field to put Texas up 6-0. Sophomore second baseman Stephanie Ceo and Washington then had RBI hits to push the lead to 8-0.

Ogle, who has hit a home run in back-to-back games, said she thinks the game is finally paying her back after a rough start to the season.

“In the first half of the season, I was hitting it, but I wasn’t getting the gap shots, so I’m glad it’s finally coming through when it matters,” Ogle said.

The three Longhorn pitchers combined to allow only two hits and no base runners past second base. Davis picked up the win, striking out four and allowing only one hit in three innings pitched. Junior Gabby Smith and freshman Lauren Slatten each pitched a scoreless inning.

Clark, who planned on getting all of the pitchers at least an inning in the circle, said it was good to see her pitchers be able to pitch well against opposing batters.

“When they’re facing our hitters in practice, it’s different because they know each other so well,” Clark said. “This gives us an opportunity to see how they’re going to attack other hitters.”

Texas will get the weekend off and then host Texas State next Wednesday before restarting conference play next weekend against Texas Tech.