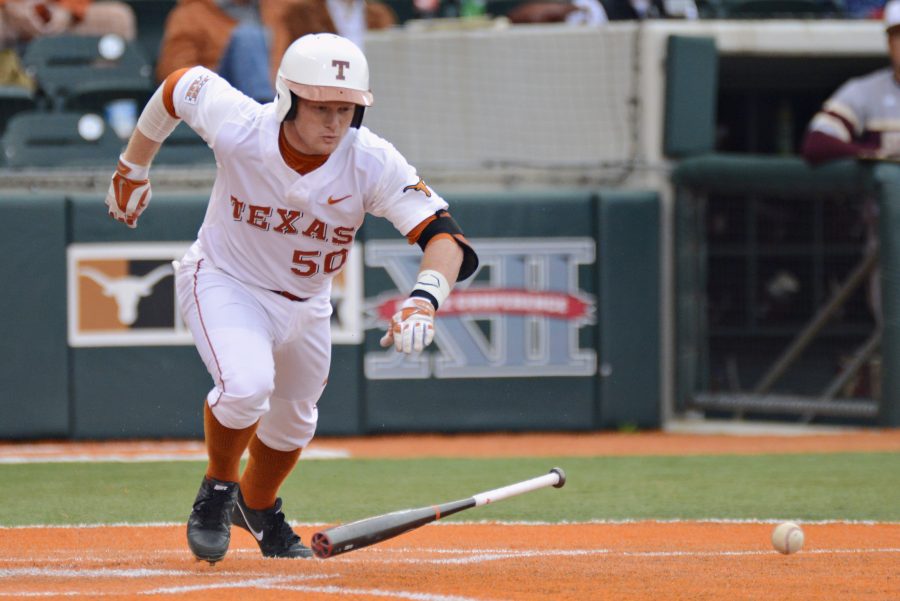 It was an unlikely hero who helped the No. 12 Longhorns knock off No. 24 Texas Tech in the rubber match to end the conference series and losing streak at 12: senior designated hitter Madison Carter. Carter had only four at-bats on the year before the game but went 3-for-6 Sunday with the game-winning RBI in the top of the 12th to seal the win.

While run-scoring had been at a premium for the Longhorns (22-7, 3-3 Big 12) earlier in the season, the bats came alive in Lubbock against the Red Raiders (22-9, 4-5 Big 12), who boast the conference’s second-best pitching staff.

Texas’ offense looked sluggish early on Friday, relying on junior second baseman Brooks Marlow to keep it in the game. Marlow’s first homer of the year tied the game at one before the Texas offense erupted in the fifth to break the game open at 5-1.

The Longhorns scored in every inning from there on out, piling it on the Red Raiders, 11-1.

On the mound, junior Parker French (4-2) went seven innings, allowing just six hits and one run, to lower his season ERA to 1.57.

In game two in Lubbock, junior Dillon Peters’ worst performance of the year doomed the Longhorns 8-4. Dillon’s ERA went up nearly a full run from 1.79 to 2.68.

Peters failed to get out of the fourth inning, giving up five earned runs while throwing three wild pitches.

Freshman Zane Gurwitz and Barrera did all they could to keep the Longhorns in it. Barrera, who was hitting just .128 on March 11, went 3-for-5 with his first career home run while Gurwitz went 4-for-4 from the nine hole to help set up the top of the lineup.

With the series tied 1-1, it came down to the rubber match to see whether the Longhorns would end their conference losing streak.

Riding the hot bats of sophomore left fielder Ben Johnson and Barrera, the Longhorns struck first Sunday on a Barrera RBI single in the first. Texas added another on Johnson’s home run in the third.

It appeared to be more than enough for senior pitcher Nathan Thornhill, who shut down the Red Raiders (22-9) in 5.1 innings.

But sophomore pitcher John Curtiss, who had won the closer role with 10.2 shutout innings on the season, blew the two-run lead in the ninth on a steal home and an RBI single. It was the first runs he’s allowed since returning from a surgery that sidelined him last season.

After two scoreless extra innings, the Longhorns finally came through on Carter’s two-run, two-out single. The Longhorns sealed the 5-2 win.