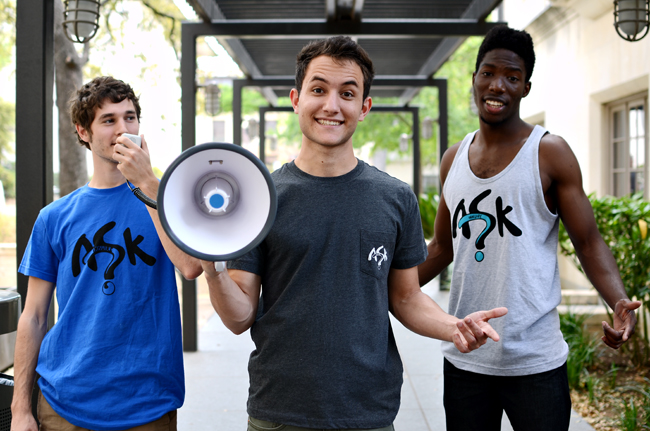 Inkuire co-founders Noah Barshop and Sam Hamad, along with Chris Omenihou, marketing and engagement director and economics junior, hope to increase face-to-face interactions between strangers through their clothing brand. Inkuire's objective is to bring strangers together and encourage meaningful conversation without the use of social media.

Six months ago, Sam Hamad and Noah Barshop came up with a way to challenge what they thought was a problem among the current generation of students: face-to-face interactions — or a lack thereof — between strangers. Hamad and Barshop created Inkuire, a clothing brand devoted to facilitating real-life interactions between people who don’t know each other.

Inkuire is attempting to increase in-person student interactions with a T-shirt. The T-shirt, which currently comes in four variations on inkuire.org, displays the word “Ask” in bold cursive across the front. Inkuire, which the founders brand as “The Human Social Network,” is based on one recurring question: Why do we hesitate to talk to strangers?

Inkuire is run out of Hamad and Barshop’s apartment in South Austin. The idea for the brand developed a few months ago and has since flourished into a website, a motivational video and the start of a movement, marketed specifically toward students on the UT campus.

“I thought to myself, ‘What if there was a way to know that I won’t get rejected, or what if it was easier to talk to someone I don’t know?’” Hamad said. “We decided to make a shirt that does that which everybody wears and says, ‘We can meet. I’m open to interaction.’”

According to Barshop, this generation of students is missing out on the experience of holding meaningful conversations with strangers, in part because of the rise of social media and the introduction of mobile devices. Barshop and Hamad said social media is great at facilitating certain aspects of communication but may be contributing to the decline in real-life interest between strangers.

“No one seems to be interested [in one another] because it’s so easy for us to be self-contained within our own affairs anywhere we go,” Barshop said.

“Digital platforms give many students a way of interacting with their peers and instructors,” Quigley said. “I don’t see it as a problem as much as I see it as a challenge for educators like myself who need to know how to reach them.” This idea is being approached by other groups as well. Thirteen University of Washington graduate students created the exhibit “Advice: Give it, Get it, Flip it, Fuck it,” where the sole purpose was getting strangers at an art exhibit to talk to each other.

The shirts are intended for people on board with the Inkuire movement to recognize one another.

“We do intend to be recognized as a clothing brand in terms of the products we sell, but it’s really more about the culture outside of the clothes,” Hamad said. “We want to show people what we can do to encourage them to break out of their comfort zones. The shirts and the video were our first step.”

Inkuire launched two weeks ago by releasing a video that explains the brand’s movement and message. The video was advertised on various UT Facebook pages, and Hamad and Barshop said the brand is focusing on affecting people on campus for now.

“We think that college campuses are the ideal places for this [movement] and real pertinent places because there are always new people moving in from their home towns and new circumstances where people may be apprehensive to opening up,” Barshop said. “With this movement, we thought it’d be the most receptive place.”

A few UT students are part of the Inkuire team and are involved in spreading the word of the brand on campus. Economics junior Chris Omenihou, Inkuire’s marketing and engagement director, wears Inkuire shirts around campus and said he’s trying to make sure students know about the movement.

“I try to drop a seed when I talk to a new person — an Inkuire seed,” Omenihou said.

Barshop and Hamad said they hope to expand the clothing options past T-shirts and into other apparel, such as hats. The two partners also said they want the brand to become a vessel for throwing events that center around bringing strangers together to produce something positive.

“We want to throw events, and we want to be a brand that brings people together,” Hamad said. “Our vision with Inkuire and with this network of people is that you can get people in a room to create something and use their talents and interests to get some cool things off the ground.”

Hamad said he is not looking to criticize social media sites, such as Facebook, through Inkuire, and that he recognizes the limitations of the Inkuire shirts but thinks they will help alleviate some of the hesitation that comes along with meeting new people.

“We know the shirt does not give you powers that allow you to go out and talk to people,” Hamad said. “We don’t expect people to automatically change their habits either. We just want a fun and creative way to switch things up a bit, and we want to see how people react.”