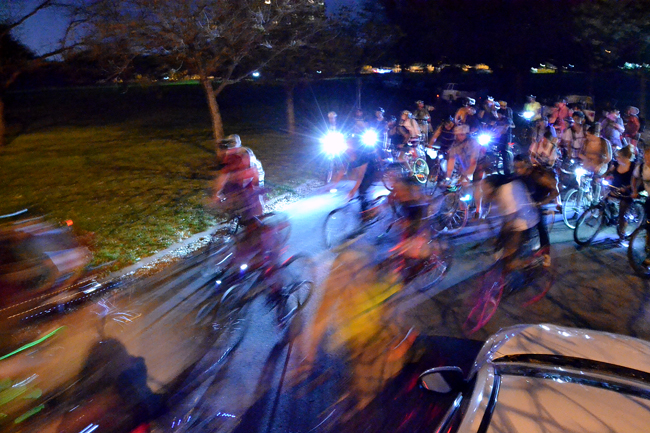 Cycling groups in Austin were previously seen as exclusive. As the scene grew, cycling groups started to open and shift from a competitive view to an open community.

Since 2009, the Social Cycling Austin group has been calling together bikers of all skill levels to go on rides ranging from five to 15 miles. Since then, Social Cycling Austin has expanded to eight cycling events during the week, with the biggest turnout on their Thursday Night Social Ride.

Hundreds of cyclists ride through Austin, passing through streets lit with holiday lights and lined with food carts, residential areas that hide lesser-known parks and the downtown night scene. The sights immerse the rider as they’re surrounded by different kinds of music coming from the stereos of cyclists.

Each week, the ride leaders change. Terry Schreck has been riding with the group for three years and now helps lead the groups.

“The first one was kind of funny,” Schreck said. “I didn’t know what it was about, so I found out where the ride started and went down. Immediately, I was welcomed into the group.”

Social Cycling meets weekly at Festival Beach on Thursday nights at 7 p.m. Prior to takeoff, cyclists meet for an hour of socializing. The group starts with about 10 people showing up promptly, but, as the time for departure nears, the number of cyclists grows to about 100-300 people.

“If you want to meet like-minded folks, people that want to experience Austin and love bikes, then this is a great group for that,” Schreck said. “This is a very diverse group with just about every cycling there is; we accommodate everyone. We try to be really inclusive and get really involved in the community.”

A number of cyclists dress up for the ride, styling their hair with neon gel and wearing outfits to match the theme of the month. Bill Murray was the theme for March.

For those individuals who prefer a smaller group setting, there are other rides available throughout the week during the afternoon and evenings.

On Wednesday nights, cyclists meet for Queer Ride, a ride co-created by Zachary Settle. This group ride creates a welcoming environment for LGBTQ individuals, as well as anyone else who wants to join.

“Before I started Queer ride, I would go on some of the bigger ones, like the Thursday social ride,” Settle said. “I rode that a lot, but I wanted to form a group that caters to our community more. I know gays and lesbians like to ride bikes in Austin, and they didn’t feel comfortable in big groups, so we started with a few friends, and it kind of became its own social ride.”

One event Queer Ride is known for is the drag-themed rides in which cyclists gear up in dresses and high heels and ride through downtown.

Tuesday nights are reserved for the yoga ride. This allows the cyclist to cruise around Austin and then unwind for a yoga lesson at the midpoint of the ride. Melissa Hagen, one of the ride leaders, has participated in the yoga ride for four years.

“It’s so beautiful,” Hagen said. “I lie on the ground, on my back, doing the yoga, reaching towards the sky, and the stars start to come out. It’s really pretty, especially when we’re by the water.”

This ride is shorter than most but makes up for the lack in distance by offering a free yoga lesson taught by various instructors joining the ride that day. The yoga lessons are primarily taught in parks, but sessions have been held all over, even on building rooftops.

For all rides, cyclists of all skills levels are encouraged to join any of the events held during the week. Ride leaders ensure that all cyclists make it to the destination, and the safety and well-being of all riders is a priority.

“We help folks get their butts on bicycles and keep them there,” Schreck said. “That’s the way we like to see it.”