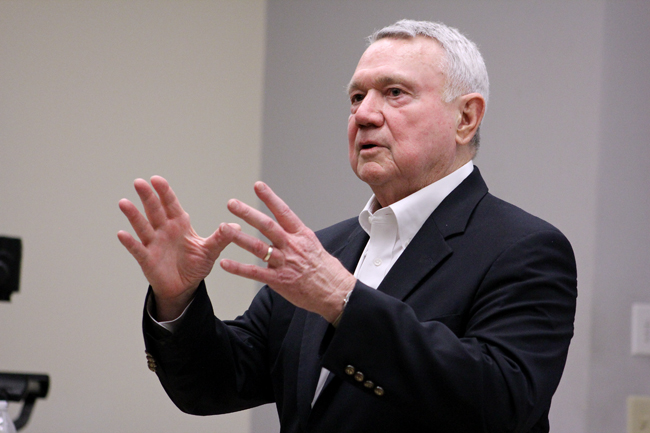 Mayor Lee Lefingwell speaks about his bacjground in public service and the future of Austin in a lecture Tuesday evening. The talk was part of a week long celebration of the Moody College of Communication.

Although Austin has experienced exceptional population and economic growth in recent years, growth creates a host of new challenges for the city, Mayor Lee Leffingwell said in a talk on campus Tuesday.

In the lecture hosted by the Moody College of Communication Council, Leffingwell said Austin is the fastest growing city in the U.S., with its population expected to reach four million over the next 20 years.

“We have not done a good job of creating a transportation plan, and it’s something we badly need to cope with [because of] the growth we’re experiencing,” Leffingwell said. “Urban Rail, along with other forms of mass transit, has to be a part of that system. We need an option for people to get into Austin that doesn’t require sitting in traffic for two hours.”

Leffingwell said Austin’s diverse economy helped it through the recession and is continuing to bring money into the city.

“Our economy is red hot right now,” Leffingwell said. “We have industries in gaming, microchips and renewable energy. The Formula 1 race alone brings in $300 million. That’s a lot of barbecue.”

According to Hugo Rojo, Communication Council administrative director, Leffingwell was chosen as a speaker because of his public advocacy and dedication to Austin.

“Leffingwell has taken a leap into the digital age to connect with Austinites and increase government transparency with tools like a recent Reddit “Ask Me Anything” and a weekly email newsletter,” Rojo said.

According to Leffingwell, the need for increased communication with the public is also a major concern for the city.

“How do we get information out in a way that’s simple and direct that everybody — even the lowest common denominator — will understand?” Leffingwell said. “Some issues are extremely complex, and to get the message across takes a lot of talent.”

Public relations freshman Alexandra Mascareno said she thought the lecture provided a good look into how the government deals with complex issues.

“I never realized everything that goes on, particularly [with] the communications aspect, [with the] state government,” Mascareno said. “It’s crazy: the amount of things the city deals with, especially as its population grows so much.”

The lecture was part of a week-long celebration by the Moody College of Communication, featuring local leaders who advocate for innovation and the public good. Past speakers have included South By Southwest co-founder Louis Black and Mark Strama, head of Google Fiber in Austin and former state representative.