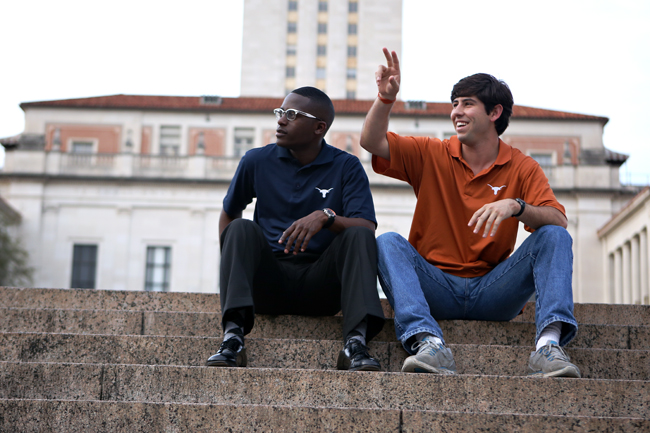 Rady and Strickland ran their campaign on over 22 platform points, including an extended Thanksgiving break, expansion of the uRide program and creating a basketball game at Gregory Gym.

“Hopefully, we can push Student Government to be a positive light on campus,” said Rady, a government and corporate communication senior. “I think, with the platform points, the way we’re delegating our platform points and meeting with administrators, we can do
great things.”

Strickland, a corporate communication junior, said she hopes to expand the uRide program to transport students safely home from downtown on the weekends. The program was created by Villarreal and Williams in the fall to give students rides home from the Perry-Castaneda Library.

Strickland said the first things she will begin working on are a campus safety phone application and expanding branding on campus. She said she also plans to continue the programs Villarreal and Williams created, such as upper-division tutoring, a cultural showcase and intramural sports games against Texas A&M University.

Villarreal said creating the Intramural Lone Star Showdown was one of the things he was most proud of during his tenure. The intramural football and basketball event was designed to continue the rivalry with Texas A&M, and, according to Villarreal, attracted between
80-100 players.

“That was something I really liked because it strengthened the relationships between a lot of different parties, and it showed Student Government can really reach out outside of its realm,” Villarreal said.

Villarreal and Williams split some of their platform points at the beginning of the year to complete more of their goals. Villarreal established upper-division tutoring at the Sanger Learning Center, and Williams created a cultural showcase in the fall to display student diversity. Williams said outside of just achieving their original platform points, he was proud of staying visible to the student body throughout the whole year.

“I wish we could have achieved more outreach, but, again, we were present and visible a majority of the time,” Williams said. “Staying visible throughout the whole year can be hard to do because there is so much going on.”

Villarreal said he was confident that Rady would be able to take over the position of SG president because of his experience as external financial director on the executive board.

“I’m going [to] be rooting for them every step of the way with their platform,” Villarreal said. “I just want to see them continue to be genuine, be in it for the right reasons and continue to get things done that benefit our campus.”