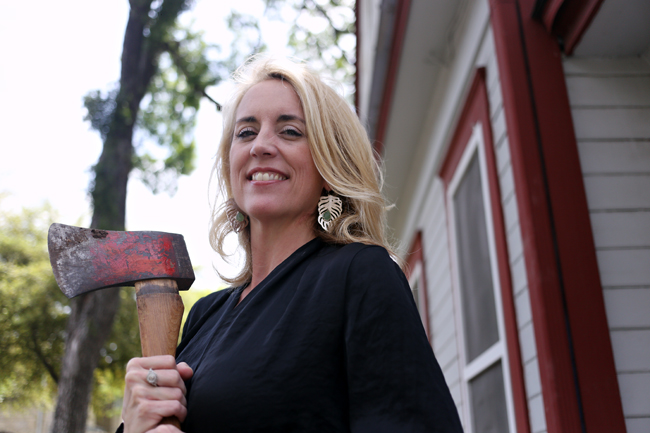 When Dianna Colton took advertising professor John Murphy’s introductory advertising class in the early ’90s, Murphy told his students to get out of the industry. There were no jobs, and money wasn’t good. Colton took the warning as a challenge and, not long after that, declared her major in advertising. Now the owner of Hack Studios, an Austin-based boutique production company that creates advertising bits for a variety of clients, Colton has made a name for herself in the field.

The studio, which turned 3 years old Tuesday, has done projects for The Professional Golfers’ Association, Dish Network and Texas Exes. Colton was particularly excited to do work for the University. Although Texas Exes didn’t have the same budget as an average Hack Studios client, Colton made the decision, as a business owner, to do the project.

Colton still remembers an event with the UT baseball program that helped shape her into the person she is today. After being told she was too tall to be a cheerleader, she saw a classified ad for a position as the baseball trainer.

“I applied for the position, and coach Cliff Gustafson thought it was hilarious,” Colton said. “He called me and the other coaches into his office. I even met Earl Campbell. They laughed it off and ended up ushering me in the Disch-Faulk Diamonds program, but I think, at that point, it was just my resolve that I can do what I want to do.”

Dillon Davies, director and editor for Hack Studios, was impressed by Colton’s honesty when he first started working for her.

“[Colton] taught that honesty and loyalty are qualities that still have a place in business,” Davies said. “[Colton] said to me when I walked in, ‘I believe in paying people for their work.’ It [was] refreshing to feel like your boss is looking out for you.”

One of the biggest difficulties production companies from Austin face is the physical distance from areas such as New York and Los Angeles. Hack Studios producer Jessee Harkey said Colton’s skills as a businesswoman aid her when it comes to competing with outside markets.

“[Colton] is very adaptable and open to change,” Harkey said. “She’s not stuck in her ways. She’s open to several directions, [letting] the industry lead her. With the industry being the way it is, business owners like [Colton] are succeeding.”

Colton lamented that it can be difficult to succeed as a business owner in a field that, she said, is dominated by men. Prior to creating Hack Studios, she worked for an editorial company but left her job to explore the world of advertising.

“[The editorial company] came up to me asking me to represent them in a different capacity and said, ‘We figured you’d want to be home with your kids and work from home,’” Colton said. “All I could think was, ‘You’d never say that to a man.’ So I got up and left.”

Colton said she is always looking for a challenge. One of her first jobs was as a creative secretary and, within a few years, she had worked her way up to the producer role within the agency. She even started a baby-clothes business without knowing how to sew.

“I’m always looking for what’s next,” Colton said. “I’m not okay with complacency. It’s boring. I like to be constantly challenged, and I guess what I look forward to every day is to see what that challenge will be.”