Texas softball hopes to rout out Red Raiders at home 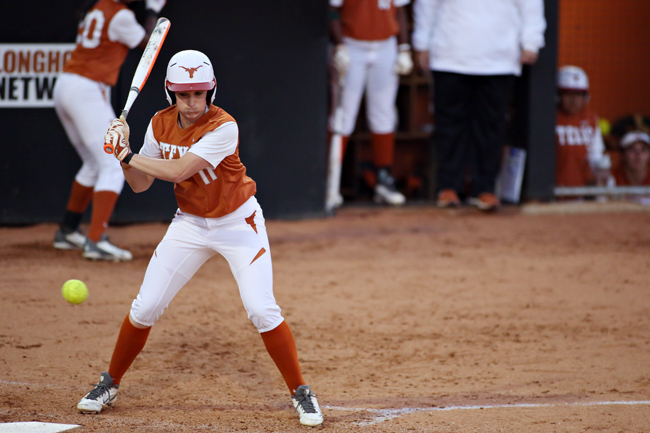 The Longhorns are currently undefeated (1-0) in Big 12 competition after winning their opener against Baylor. The Red Raiders come into the game after three straight losses in their weekend series with Baylor.

Texas looks to carry the momentum it gained from Wednesday’s meeting into today’s matchup and continue its three-game win streak. Offensively, Texas had one of its best performances this year, producing 19 runs — the second most in the program’s history — on 15 hits. Senior shortstop Taylor Thom hit two of the team’s four home runs, including the fifth grand slam of her career and the most in Texas history.

“We had a couple days off, and I was able to come out here and just work on some things that I really needed to work on personally, and I think that showed in my performance,” Thom said following her 3-for-3 night with a team-leading seven RBIs.

Freshman pitcher Tiarra Davis will likely get the start versus Tech, having established herself as Texas’ ace this season. Davis has also proved to be a force at the plate, generating at least one RBI in her last three games.

Texas Tech pitchers have a modest 2.47 combined ERA, and surrendered their greatest amount of runs last week in their first game of the series against Baylor in a 14-1 loss. The Longhorns suffered their worst loss of the season to Arizona State by a score of 8-3. Despite the Raiders’ slightly better overall record (27-12), the Longhorns (21-15) are favored to come out on top, relying on an aggressive approach at the plate and timely fielding.

A win will keep Texas undefeated in Big 12 action and drop Tech to 0-4.