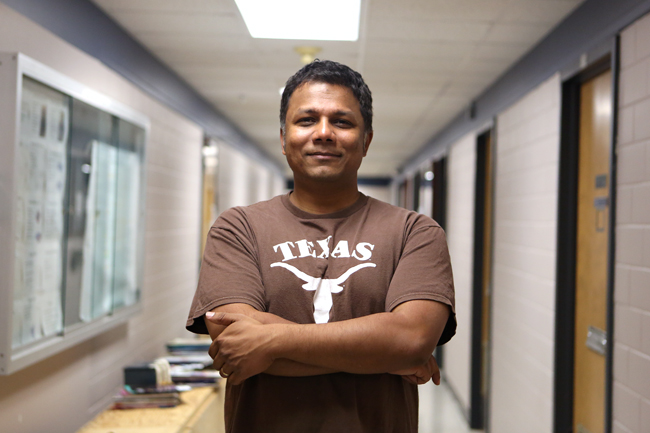 Sriram Vishwanath (above), engineering associate professor, and graduate student Vidur Bhargava have developed technology that allows smartphones to communicate between one another to maximize Wi-Fi connections.  " />

Sriram Vishwanath (above), engineering associate professor, and graduate student Vidur Bhargava have developed technology that allows smartphones to communicate between one another to maximize Wi-Fi connections.

Smartphones can now increase their Wi-Fi connection speed from the phones around them — even when there is no signal. The technology, developed by UT researchers, may soon be available to the public.

Sriram Vishwanath, electrical and computer engineering associate professor, and Vidur Bhargava, a computer science and electrical engineering graduate student, have found a way to give smartphones the ability to communicate and maximize their Wi-Fi connections through one another. Their research has become the basis for startup software company M87 — funded in part by the investment program UT Horizon Fund.

“We thought, ‘Cell phones already talk to a cellular base station, so why can’t phones talk to each other directly?’” Vishwanath said.

The software essentially allows smartphones to use the routing software to locate other smartphones in the area. Once located, a smartphone with a better connection can be “piggybacked” off of, giving the smartphone in, for example, the basement of a building the same Wi-Fi connection as someone on the first floor.

Matt Hovis, M87 vice president of marketing and communication, said he would describe the startup company as overturning the top-down power structure of connectivity.

“Cellular towers give out bandwidth and connection to phones — that system was designed for when smartphones weren’t smart,” Hovis said. “Now they’re the most aware device of network conditions at any given time.”

Cullen Bounds, computer science and Plan II sophomore, said he had no idea Wi-Fi piggybacking was a possibility.

“The software will probably be popular on college campuses and encourage more research of the sort,” Bounds said. “It sounds fantastic.”

According to Hovis, the software is smart enough to recognize if its piggybacking will affect the performance speed of either phones and will avoid connection if so. Hovis said the battery life of both phones should not see a significant decrease by any means, and the aggregate benefit of the network is positive.

According to Vishwanath, completed software could be coming to the public soon.

“It’s a lengthy process to impact the market,” Vishwanath said. “I expect by the next year or so we’ll see it out there.”