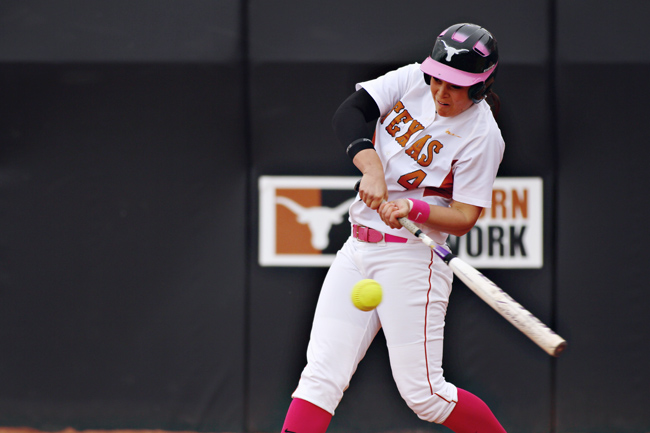 Since season’s start, freshman starting pitcher Tiarra Davis has improved from an inexperienced collegiate rookie to the ace of the Longhorn staff.

In two of Texas’ three games against Texas Tech this weekend — both of which Texas won — Davis combined to allow only two earned runs while striking out 17. Texas finished the weekend 2-1 for its first Big 12 series win of the year.

“This is just a good starting point,” Davis said.

Friday night, the Longhorn offense picked up where it left off after Wednesday’s win against Texas State, scoring five runs in just two innings. Senior shortstop Taylor Thom belted a two-run home run in the first and sophomore right fielder Lindsey Stephens added a two-run single in the second.

That would be all the runs Davis would need, but she didn’t walk off without some trouble. After Davis retired six of the first seven batters, Texas Tech loaded the bases in the third with one out. Davis sent the next two batters flying out to end the threat.

The Red Raiders would pose a threat again in the sixth, getting two on with one out. Davis nearly got out of the inning, but Texas Tech scored its only run of the game on an error by sophomore second baseman Stephanie Ceo.

“My defense was there to back me up when I got into jams,” Davis said. “I put my full trust in them that they’ll get me out of the jams I work myself in to.”

Saturday was a tougher day for Davis. The ace lasted only 2.1 innings, giving up four earned runs and four hits through 71 pitches.

Texas tied the game at four in the third, but in the top of the fifth, Tech reclaimed its lead on a home run by sophomore infielder Samantha Camello. An error by freshman shortstop Devon Tunning that inning extended the lead to 6-4. Texas bounced back to within one after Tunning walked with the bases loaded, but Ceo lined out to end the game.

Davis bounced back in the rubber match of the series Sunday, retiring the first seven batters of the game. Like Friday night, she managed to work her way through tough situations, allowing only two earned runs.

Davis said she tried staying more relaxed after giving up a hit.

“My teammates did great when somebody did get a hit,” Davis said. “They were like, ‘It’s okay Tiarra. You’re doing fine,’ and I would go to the next pitch.”

The offense rebounded as well, striking early and often in the game. Tunning, who had a career night Wednesday night, topped that outing with a three-RBI day, including a home run and a triple. The Longhorns took the game 7-3.

Texas moved into a tie with Baylor for second in the Big 12 and will play Iowa State in Ames this weekend.