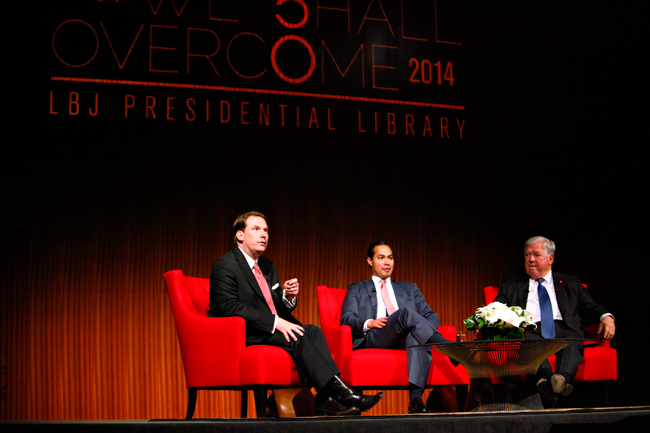 Former Mississippi governor Haley Barbour and San Antonio mayor Julian Castro both said they felt optimistic that immigration laws would be passed in 2014, and agreed the U.S. government must do more to address the issue of immigrants who overstay their visa.

“We haven’t done much about people who overstayed their visa and ensuring that we have a way to track who comes in and then whether they leave in a more effective and efficient way is an important part of this,” Castro said.

Barbour said he thinks U.S. citizens are willing to spend money on a secure border, and he thinks the Senate bill focuses on this. Barbour said the U.S. shouldn’t deport employed immigrants because it wouldn’t be economically practical.

“Three, four, five million of these people who have had the same jobs for years, for decades, about the stupidest thing we could do economically is make them leave,” Barbour said. “We don’t have anybody to replace them with. The impracticality of sending everybody home should be obvious to everybody.”

According to Barbour, between four and five million immigrants – out of 11 million – could account for those who do not leave the U.S. once their visas expire. Barbour said this created a problem while passing laws through Congress because Americans do not want people to be rewarded for breaking the law.

“The two big issues and the underlying issue [are] that you have to deal with is you’re not rewarding people for breaking the law, and I think that can be done in a way that’s very appropriate and right,” Barbour said.

Near the end of the discussion, a woman in the audience yelled at Castro, asking him to stand up for "dreamers," referring to the DREAM Act, which would allow current, former and future undocumented high-school graduates and GED recipients to obtain citizenship through either college or the armed services.

"Mayor Castro, I am a dreamer… Our families are under attack… We need you to act now," the woman said.

Castro said the one of the most prominent issues was how border security is defined. Since 2001, the U.S. has increased the number of agents along the 110-kilometer Mexican-U.S. border by 117 percent, mediator Brian Sweany said.

In a press conference after the panel, Castro said there is always room for improvement in methods of securing the border, and he hopes to promote a more robust and active legal system.

“There’s no question that there’s been a frustration among many dreamers,” Castro said.

Although Castro and Barbour said they were optimistic about laws being passed for immigration reform, sociology professor Nestor Rodriguez said he did not see changes happening in the near future.

“I think it’s unlikely at this point,” Rodriguez said. “This requires more discussion, how long this will take — I don’t know. I’m not optimistic it’s going to happen any time soon.”

“Nobody wins in the present situation,” Rodriguez said. “We need to decide who can stay and who can go, but just being in limbo, we all lose.”

Javier Huamani, treasurer for University Leadership Initiative, said as an undocumented student, he hopes the Obama administration will push for administrative reform in the near future.

“It’s the fact that people and families are being torn apart on a daily basis,” Huamani said. “That’s the main problem. People shouldn’t have to live in fear.”

According to Huamani, there are about 500 undocumented students on campus who deal with the constant fear he faces.

“I would like my parents to be eligible for it as well and be able to be protected so they don't have to live in fear,” Huamani said.