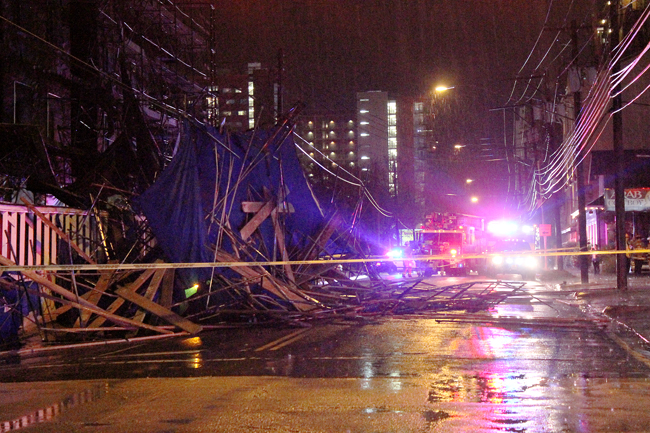 Scaffolding on a construction site collapsed in West Campus near 24th and San Gabriel streets Monday evening, trapping a vehicle underneath the rubble.

The scaffolding was attached to the Regents West at 24th apartment building, which is currently under construction. Austin Police Department Cpl. Michael Chancellor said inclement weather may have caused the collapse.

“They’re not sure right now if it’s weather related. … Apparently, they had another scaffolding collapse downtown as well,” Chancellor said. “I don’t know the extent of it.”

Four Austin Fire Department units, one Travis County ambulance and multiple APD officers arrived on the scene, but no one was hurt, Chancellor said.

Four people were inside the vehicle when the scaffolding gave way. Madlyne Rodriguez, who sat in the back seat, said the incident happened in a matter of seconds.

“It was windy, very windy,” Rodriguez said. “The light was green, so we were just driving by when we heard a booming noise, and we heard the first piece of wood hit the car. I told my husband to hurry up and drive, but we got caught and the whole thing just collapsed.”

Rodriguez said she and her family exited the car through the passenger side doors.

“People on the street were yelling at us, ‘Come out! Come out! It’s safe to get out,’ so we jumped over a lot of scraps of metal to get out of the car,” Rodriguez said.

Chris Cordeiro, an employee of JE Dunn Construction, which is constructing the Regents West building, said it’s not uncommon for strong winds to bring down scaffolding from buildings.

“Scaffolds, if you get a strong enough wind that catches something just right, it’s kind of like a domino: One little thing gives and the wind catches it, then it can come down,” Cordeiro said. “You try to make it as safe as you can and make sure everything is secure, but, with the forces of nature, sometimes you can’t stop it.”

A net below the scaffolding is used to prevent pieces of scaffolding or construction tools from falling onto the streets, according to Cordeiro.

“The blue safety netting keeps things from falling on people, but it’s possible that the wind blew hard enough to catch on that, especially if it was wet,” Cordeiro said.

Austin Energy personnel inspected the power lines near the site before a crew arrived to remove the collapsed scaffolding.

Nariah Back, who witnessed the incident from across the street, said the noise of the scaffolding hitting the car scared her.

“I didn’t know how tall that building was or how much was going to fall down,” Back said. “I was really concerned about people who might have been walking by.”