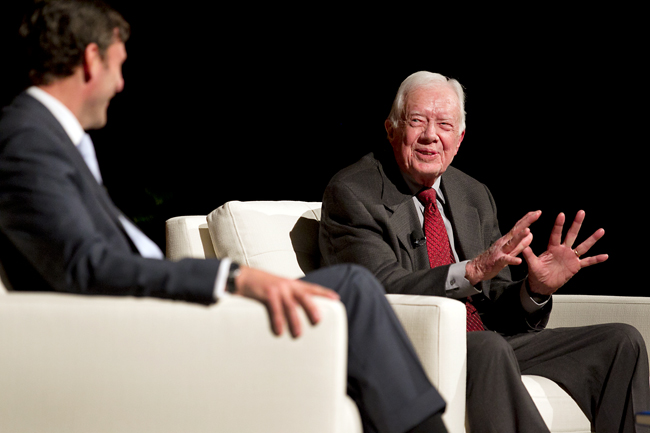 Former President Jimmy Carter speaks with Mark Updegrove, director of the LBJ Presidential Library, on the first day of the Civil Rights Summit on Tuesday evening. " />

Former President Jimmy Carter speaks with Mark Updegrove, director of the LBJ Presidential Library, on the first day of the Civil Rights Summit on Tuesday evening.

Former President Jimmy Carter said there are still racial and women’s rights issues the United States still needs to address in a conversation at the Civil Rights Summit on Tuesday.

In the conversation, hosted by LBJ Library director Mark Updegrove, Carter said in his work with the Carter Center—an organization Carter founded with his wife in 1982 to advance human rights—he has seen extraordinary prejudice against women and girls, including female genital mutilation, female infanticide and sexual slavery.

“Slavery, at this moment, is greater than it ever was in the 19th century,” Carter said. “I don’t want to shock people too much, but it’s the worst human rights violation on earth.”

According to Carter, sexual abuse is a major problem not only in the countries around the world, but also in universities in the U.S.

“In this country, we are not above—I hate to say condemnation—but we are not above reproach,” Carter said. “The number one place for sexual abuse is the United States universities.”

Carter also said he thinks the fact that Title IX allows federal funds to be withheld from universities if the college administrators fail to properly address sexual assault cases will help solve the problem.

In a blog post containing an excerpt from his recent book "A Call to Action: Women, Religion, Violence and Power," Carter presented his concerns about the role of religious and cultural interpretation on hindering gender equality with The Elders, an organization established by Nelson Mandela which aims to establish international peace and human rights. Carter, a leader in the organization, helped create a coalition in 2011 called Girls Not Brides with the goal of ending child marriage.

“You’ll note that some of this work was quite child marriage-focused,” Elliott Fox, The Elders media officer, said.

Fox said Girls Not Brides consists of more than 300 civil society groups from 50 countries. Although the coalition is now an independent organization, Fox said The Elders now focus on equality for girls and women more broadly.

During the conversation, Carter also said segregation still exists in the U.S., especially in public schools in the Deep South.

“We still have a gross disparity between black and white people on employment [and] the quality of public education,” Carter said. “A lot of so-called segregation academies were founded so white people could send their kids to a very segregated school.”

Although Carter was able to appoint several women to lifetime judicial appointments and African Americans to statewide boards, he was not able to advance gender and racial equality as much as he wanted to, according to government professor Bruce Buchanan.

“It was in the direction as he saw it, but not as much as he had hoped,” Buchanan said.

Carter said he does not think the government should deny benefits to those in same-sex marriages, but he said he thinks individual churches should be able to retain their autonomy of religious belief.

“I don’t believe there’s a difference between people because of their sexual orientation,” Carter said. “My own belief is that civil services should be approved all over the country.”

The event concluded the first day of events at the summit. Presidents Barack Obama, Bill Clinton and George W. Bush are also scheduled to speak during the three-day summit.