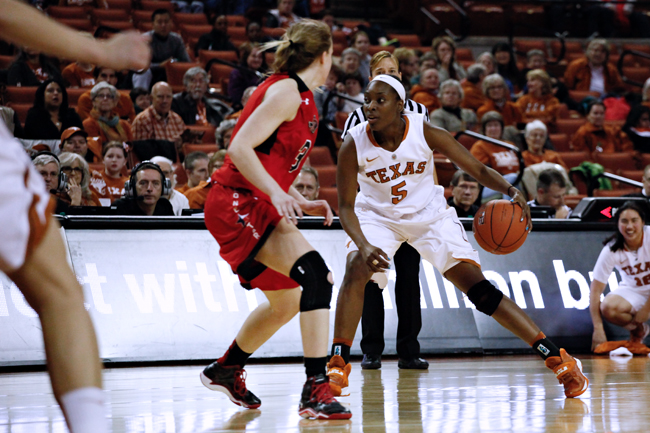 Senior guard Ashley Roberts fought through injuries and navigated junior college on her way to Texas, and her journey has played a large role in her desire to coach. " />

Senior guard Ashley Roberts fought through injuries and navigated junior college on her way to Texas, and her journey has played a large role in her desire to coach.

Season-ending injuries are always devastating. But for senior guard Ashley Roberts, whose only season as a Longhorn came to an abrupt end after suffering a left knee injury in January, it might have been for the better.

“It definitely made me really want to be a coach,” Roberts said. “It made me watch a lot, and I was able to see things the coach saw. I was able to talk to players and help coach them because I have a lot of knowledge about basketball.”

Roberts attended South Plains Junior College for two seasons as a stepping stone while she healed, taking the lead in the program. She received MVP and Offensive MVP honors twice, was a two-time All-Conference First Team guard and was named to the All-Region and Honorable Mention All-American teams.

But starring at junior college wasn’t the end goal for a career that began at age 5. The junior-college star got an opportunity to play for the Longhorns.

“It was a great choice for me because I ended up here, but the transition was a big deal,” Roberts said. “It’s more fast-paced. We have things to do every day, all day, [which] is totally different than junior college.”

Roberts joined her cousin, sophomore guard Empress Davenport, in representing Duncanville for the Longhorns. Teaming up with family wasn’t anything new, though, because Roberts had spent her whole life surrounded by two brothers engrossed in basketball, a father who was in love with the game and a mother who formerly played volleyball.

“It’s just normal, I guess,” Roberts said. “We’ve been playing together for a long time so it’s nothing special.”

Roberts said adjusting to a new coaching staff and young teammates in her first season at Texas was difficult, but she saw the fruits of her labor.

“My first year here [had] a lot of adversity … and it was hard at times,” Roberts said. “This year was totally different. We overcame things and got big results out of it.”

“[Roberts and Mazionyte] came here to help us try to get the program on track,” Aston said. “They have sacrificed minutes, but they’ve always been positive and had the same goal as when they came here.”

Roberts peaked early in her Texas career, during her only 16 games while healthy during her junior year. Although she averaged just 5.3 points per game, she did finish with a team-high .417 3-point field-goal percentage.

When Roberts walks the stage in May, an occasion she called “bittersweet,” her time at Texas will be defined by more than her stats on the court. She takes pride in completing her college degree and knows that coaching situations will be the impetus for her future career.

Roberts plans to attend a coaching symposium in Florida next month as she searches for a position as a graduate assistant or coach. She said she will also consider returning to Duncanville High School to coach under Longhorn legend Cathy Self-Morgan.

“[Self-Morgan] is a person who can help me get a job or who I could actually work for,” Roberts said. “I’ve known I wanted to be a coach since I was in high school. I love basketball, and if I can’t physically play basketball, I want to be around basketball.”