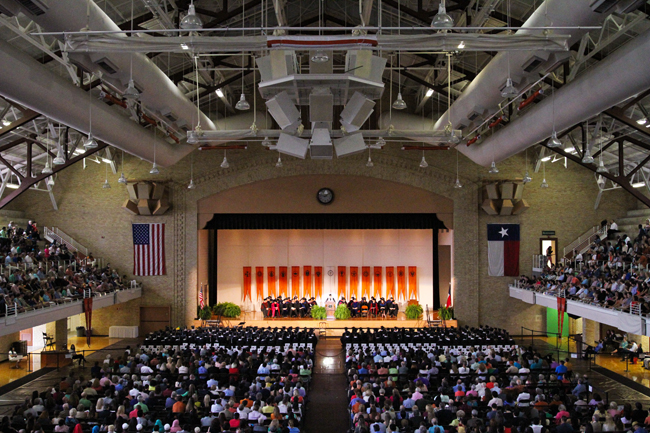 Only five of the 14 commencement speakers since 2000 have been women— most recently Olympian Sanya Richards-Ross. " />

Only five of the 14 commencement speakers since 2000 have been women— most recently Olympian Sanya Richards-Ross.

Although the University has hosted numerous commencement speakers since its first commencement ceremony in 1884, during the past 24 years only about one-third of those speakers have been female.

Horacio Villarreal, former Student Government president, said diversity is one of many factors that influence the decision for commencement speaker.

“I don’t know exactly why that happens,” Villarreal said when referring to the lower percentage of female speakers. “A lot of it just has to do with the current time and with what’s going on in the world. We try to pick someone relevant to UT, who has gone through challenges, and who will be motivating to students.”

“Student leaders from the Senate of College Councils, the assembly and Student Government get together with the [University] president to decide who the speaker is going to be,” Clark said. “We make a rough list of initial names from input we get from our constituents, and then we vet them and the list gets narrowed down.”

Several factors, such as alumni status and recognition, influence the choice for commencement speaker, according to Clark.

“Being a UT grad is always a top priority,” Clark said. “Then, we want someone well-recognized — particularly if they have national recognition around the time of commencement.”

“We look for someone we think would be captivating for students to hear,” Clark said. “It wouldn’t make a lot of sense for us to pick someone who’s going to put people to sleep.”

Villarreal said he thinks more students should be involved in the selection of a commencement speaker.

“Every student should have a say in sharing their opinions,” Villarreal said.

The last female speaker the University chose was Sanya Richards-Ross, a gold medal Olympic sprinter and Texas alum who spoke at the 2013 commencement ceremony. Since 2000, five of the 14 commencement speakers have been female.

Michael Morton, former Senate of College Councils president, said the University chose Richards-Ross because of her accomplishments and alumni status.

“The students selected her because she [was] a leader at the top of her profession who achieved success through integrity and hard work,” Morton said in a statement released by the University.

“UT has a lot of diverse graduates,” Clark said. “There are a lot of people who have gone out there and, as the University motto says, ‘changed the world.’”