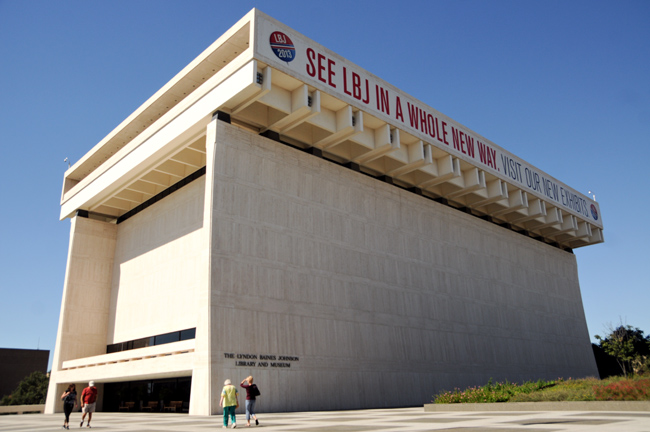 Scroll down to read our liveblog, which was updated throughout the day.

Update (6:17 p.m.): In his speech Thursday night at the Civil Rights Summit, former president George W. Bush focused primarily on education as both a battleground and driver of civil rights progress.

“From Little Rock Central High School to the University of Mississippi, the fight for civil rights took place in educational settings,” Bush said. “Education provides the skills necessary to expand horizons and allow for economic success. In so doing, we secure our democratic way of life.”

Check back soon for a full recap of Bush's remarks.

“It’s going to be done, as you lament and as I lament, outside of Washington,” Miller said.

Spellings said education will be a pertinent political issue in the future.

“It's going to be a political issue, certainly on the role of the federal government in education,” Spellings said. "We have sold that education is the key to the American Dream."

In order for any education legislation to be passed, both parties will have to work together, according to Miller.

“If you keep this [partisanship] up, I think you lose your democracy,” Miller said. “You can’t get  to the remedies, because you can’t talk to one another about it. You’ve got to walk across the aisle.”

Kori Rady, Student Government president, said he enjoyed Obama’s speech and found he could apply certain aspects of it to his own life.

“His speech was as good as Obama’s speeches always are,” Rady said. “The general focus was on how to stay on course and push for what you believe in. If you look at the heart of that, you can relate it to what you do in your daily life — there was something tangible there for you to take away.”

Ugeo Williams, former SG vice president, said he found out he had a seat at the keynote address early Thursday morning.

"It felt really great seeing him,” Williams said. “I’m pretty sure I was one of the million people who felt like he was making eye contact with me."

Rev. Jesse Jackson, a major figure of the civil rights movement and Baptist minister who ran for president in 1984 and 1988, sat down with The Daily Texan this morning to discuss the civil rights issues he feels students in the United States are most affected by today. Read the full Q&A here.

Three people, including two UT students, were arrested after protesting for immigration rights outside the LBJ Library during President Barack Obama’s address, according to UTPD spokeswoman Cindy Posey.

Posey said the University will file charges against the three protesters for criminal trespassing.

Undeclared freshman Emily Freeman, radio-television-film freshman Alejandra Gomez and Patrick Fierro, who is not a UT student, were protesting as part of several immigration-related demonstrations coordinated by University Leadership Initiative over the course of the week.

Linguistics junior Diana Morales, a ULI member, said the group members knew there was a chance they would be arrested.

“We knew that the three people who were there were willing to take any risk to bring our message to Obama,” Morales said. “His administration has deported over 2 million people – this is something no other president has done, and his term is not even over.”

On Wednesday, ULI members, including the three people who were later arrested, chained themselves to the Martin Luther King Jr. statue on campus, where they stayed overnight.

Updated (1:05 p.m.): In keynote, Obama highlight's LBJ's use of government as a force for good

At the keynote address at the Civil Rights Summit Thursday, Obama said that though people still debate the role of government in helping promote equality, to deny that government can help forward society is to “ignore history.”

“It’s true that despite laws like the Civil Rights Act and the Voting Rights Act and Medicaid, our society is still racked with division and poverty,” Obama said. “Yes, race still colors our political debates, and yes, there have been government programs that have fallen short. There are limits to change…[but] I regret such premises, because I have lived out the legacy of LBJ’s efforts.”

Obama said major pieces of legislation, though unpopular at the time they were passed, established critical legal protections for African Americans and other American minorities.

“The law alone isn’t enough to change hearts and minds,” Obama said. “[Johnson] understood laws could not accomplish everything — but only the law could anchor change, and set minds and hearts on a different course. And a lot of Americans needed the law’s most basic protections.”

In an interview with The Daily Texan, Rev. Jesse Jackson said the rise in student loan debts is one of the biggest civil rights issues the United States is facing today.

“We should, in fact, have a plan now of student loan debt forgiveness and reaching out to that talent pool,” Jackson said. “That is one of the challenges of our time – rapidly reducing student loan debt."

Jackson said students should protest the cost of higher education.

On Wednesday, Jackson said he left a scheduled trip to Japan early to attend the final day of the Civil Rights Summit in Austin.

Check back soon for the full transcript of the interview.

The "Women: How High is the Glass Ceiling?" panel has been canceled this afternoon due to personal circumstances of one of the panelists, according to Elizabeth Christian, president of the LBJ Foundation.

The afternoon panel "Social Justice in the 21st Century: Empowering Minds, Changing Hearts, and Inspiring Service," at 2:05 will continue as scheduled.

2) A conversation with Hall of Famers Bill Russell of the NBA and Jim Brown of the NFL about their involvement in the civil rights movement in their youth. Harry Edwards, sociology professor emeritus at the University of California, Berkeley, moderated the panel.

3) A reflection by leaders who were on the front lines of the civil rights movement. The panel featured U.S. Rep. John Lewis, D-Georgia, former NAACP chairman Julian Bond, and Andrew Young, former U.S. Ambassador and congressman. Lonnie Bunch, founding director of the National Museum of African American History and Culture, moderated the panel.

Other highlights from the day can be found on our Civil Rights Summit, Day 2 Liveblog.