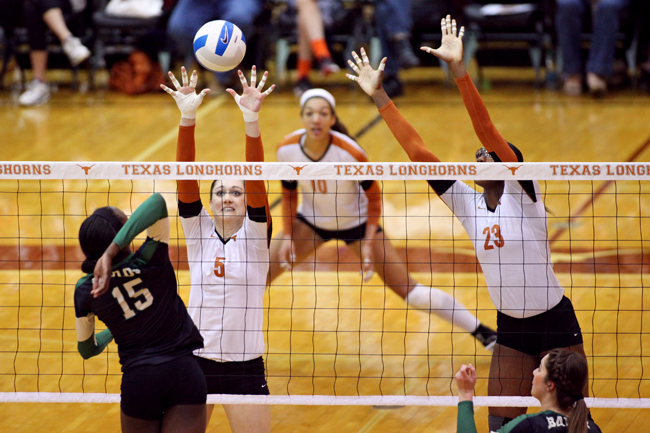 Following a shocking exit in the semifinals of the 2013 NCAA Volleyball Championships in December, the Longhorns will play their annual spring match Saturday against New Mexico State at Gregory Gym, where wins are almost a guarantee.

The match with New Mexico State will be the fifth for the Longhorns this spring, as the team recently competed in the F.A.S.T. Complex Collegiate Invitational last weekend. The Longhorns picked up three wins against UTSA, Oklahoma and Texas A&M before falling to Rice in the final match of the tournament.

Texas will be buoyed by junior outside hitter and perennial All-American Haley Eckerman, who led the team with 447 total kills during the 2013 season. The middle of the Longhorns’ rotation will be led by junior middle blocker Khat Bell and sophomore middle blocker Molly McCage, who finished third and fourth in total kills with 188 and 154, respectively, during the season.

Texas compiled a 13-0 record at home during the regular season and swept the conference with a perfect 16-0 record.

First serve for the match will be Saturday at 4 p.m., and fans can watch the two-hour match on the Longhorn Network.