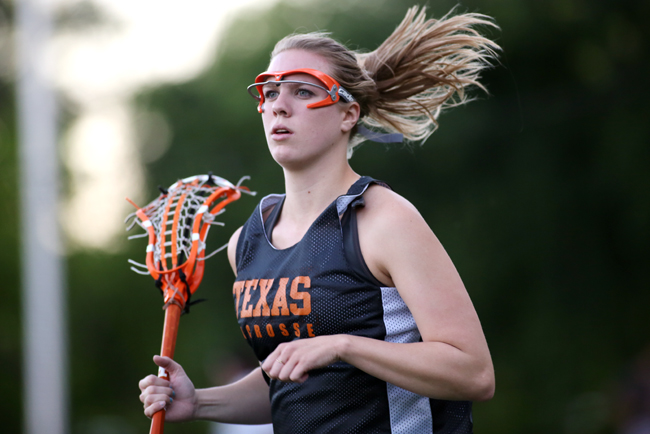 Senior midfielder Tully Moorhead led Texas with 55 goals last season and was named the 2014 WCLA Preseason Player of the Year. The Longhorns are currently 9-8 on the season. " />

Senior midfielder Tully Moorhead led Texas with 55 goals last season and was named the 2014 WCLA Preseason Player of the Year. The Longhorns are currently 9-8 on the season.

Longhorn senior midfielder Tully Moorhead, Lacrosse Magazine’s 2014 WCLA Division I Preseason Player of the Year, has her eyes on the future in her last season as a club lacrosse player at Texas.

“Tully is an all-around great player,” head coach Brandie Leach said. “She is dangerous at both ends of the field.”

Last season, Moorhead led the team with 55 goals and has already surpassed that total this season with two games left until nationals. Leach suggests that those statistics are just the tip of the iceberg when it comes to Moorhead’s talent and sportsmanship.

“Her internal motivation is very important to the success of our team because she is a captain, leader, and her teammates look up to her,” Leach said. “Every practice and game, she exemplifies this trait.”

The team is 9-8 this season, including a blowout 17-0 win against Texas A&M and narrow losses to higher ranked teams. Now in her 11th and final season as a lacrosse player, Moorhead still has the same passion for the game that she had when she first picked up a stick.

The Grapevine native immerses herself in the game she loves. After graduation, Moorhead said she would love the opportunity to coach, but is currently planning on going into research to become a commercial developer or international businesswoman in Austin or Miami.

“I coached Westlake and Austin High my freshman through junior years. It depends where I end up — looking like Austin or Miami. Both cities have really amazing athletes, just not the most developed lacrosse network,” Moorhead said.

With graduation just around the corner, Moorhead is looking for post-collegiate leagues to play in, but the search may prove to be difficult.

After graduation, Moorhead will have a family connection to the University: Her sister will also be playing for the Longhorns.

Moorhead has a bright future ahead of her, but her love for the lacrosse team here at Texas will never waver.

“My favorite memory was the last weekend in February this year,” Moorhead said. “We had played so well all weekend and we were playing Florida — ranked in the top 2 or 3 right now — and I look over on the sideline and see my roommates, family, my friends, my partner and his family. So my favorite memory: playing really well in front of everyone I love.”