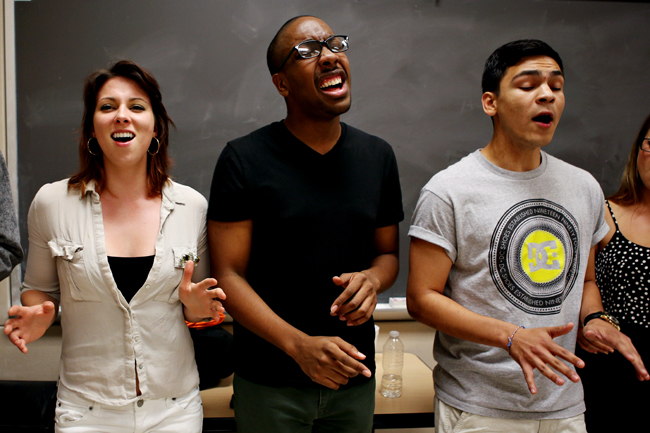 There are not many opportunities to see hula hooping and an a capella performance at the same event, but Texas Revue will make that happen this weekend when it brings the different talents of UT together for one night.

The Texas Revue talent show will feature 12 acts composed of individuals and various student organizations. At the end of the night, the best act will receive a $1,000 prize and the best technical act — the act with the best staging and costumes — will receive a $750 prize.

“Any student organization or any student can audition,” said Kelly Hogg, marketing and business honors senior and event coordinator for Texas Traditions. “There’s no limit on what type of talent or who can audition. It’s really open. What that means is, we’ve got this really diverse group of really talented people performing.”

One of the groups performing is UT’s One Note Stand a capella group. They will sing “Happy” by Pharrell Williams and “The Dog Days are Over” by Florence and the Machine.

Glen Miglin, engineering and plan II senior and One Note Stand vice president, has been in One Note Stand since his freshman year. He became interested in a capella music in high school when Rice University’s a capella group came and performed for his school.

“I was instantly taken by the layers of the sound and the beatboxing and just the novelty of it, really,” Miglin said. “Ever since then, I’ve been looking up a capella music on iTunes and YouTube. Then I came to UT and one of my first goals was to find an a capella group and join them.”

One Note Stand has auditioned for Texas Revue four times since they were established five years ago.

“Texas Revue has been a goal for us for a while, actually,” Miglin said. “We’ve auditioned before, and this is the first year we made it. It’s really exciting to get to show all of your peers what you do in your free time.”

In order to make it this year, the team has been working to improve upon its choreography technique and increasing its charisma.

Government junior Allison Cahanin will be performing a solo hula hooping act. Cahanin became interested in the sport while at a concert with hula hoopers in the crowd. She taught herself tricks using YouTube videos, and then joined hula hooping groups on campus and became a member of UT’s Longhorn Circus.

Her act will not be standard waist hula hooping. Instead, it will resemble more of a dancing routine.

“If you’ve ever seen a circus performance, often they have hula hoop dancers who do acrobatic-type tricks with the hula hoop. It’s more like dance. It’s not just around the waist,” Cahanin said. “Its around my legs, my arms, at one point I’m in a headstand doing it on my foot.”

Cahanin will be able to share her talent with more people than she ever has before, as the Hogg Memorial Auditorium seats over 1,000 people.

“Last semester, me and a friend would hula hoop downtown on Sixth Street, so I was hula hooping in front of a crowd there,” Cahanin said. “But it was just people passing by and never more than like 20 people.”

Hula hooping and a capella singing are only a small sample of the different talents at Texas Revue. Hogg said there will something there to suit everyone’s interests.

“If you like something, you will probably get to see it,” Hogg said. “And you might discover new things that are really cool that you’ve never seen before.”